RPA, "My Step" and the Sasna Tsrer Party reacted to allegations made  by head of State Control Service 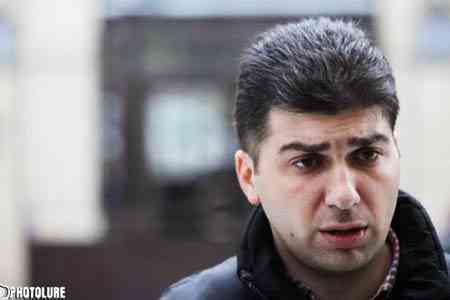 ArmInfo. That what happened with the head of the State Control Service(SCS), David Sanasaryan, is an unpleasant incident.Press secretary of the Republican Party of  Armenia, former Vice - Speaker of the National Assembly, Eduard  Sharmazanov, stated this at a press conference on April 19.

"Tha what is happening now is connected with the Pashinyan's fiasco.  Yesterday David Sanasaryan stated that this is a trumped-up  accusation, and if so, the Pashinyan's government does not take a  fair approach to its subordinates. If one of the officials accuses  the authorities of fabricating the case, no guarantees that other  cases were not fabricated, including cases against Robert Kocharyan  and Manvel Grigoryan, "said Sharmazanov.

In turn, Vice-Speaker of Parliament Lena Nazaryan, referring to the  case of Sanasaryan, said that in the fight against corruption,  representatives of the new government will no longer divide people  "into friends and strangers" as it was before. "We will consistently  fight corruption. I trust the actions of the National Security  Service and I believe that David Sanasryan could act for his own  purposes," Nazaryan said. She also stated that she does not believe  that one of the officials can be "set up", and also that someone, if  he is guilty of a crime, can go unpunished.

The Sasna Tsrer party also made a statement in which it noted that  the persecution of Sanasaryan is "a qualitatively new stage in the  revenge of the Kremlin system that holds Armenia dependent on  Russia".  According to the party, Sanasaryan is prosecuted for  insubordination and resistance to this system.

The statement of the party that put out ArmInfo also stresses: "This  system not only easily overcame the wave of revolution, but also  gained unconditional trust of the new government. If Pashinyan does  not realize this, then in the near future he and his team members  will be removed from the political arena and the country will once  again be in a swamp of violence, injustice and corruption, "the  party's representatives stress, noting that the only goal of this  system is to return to the past.

"Sasna Tsrer" advises Pashinyan to give a political and legal  assessment of the activities of the previous regime, establish  transitional justice, implement political, economic and agency  lustration, implement fundamental reforms of the state system. Also,  representatives of the party propose to dissolve the National  Security Service and create a new body. "At the same time, the  director, deputy director of the National Security Service should be  removed from their positions," the statement said.

To note, the head of the State Control Service, David Sanasaryan, was  charged under 308 (Abuse of office - Ed. note) As stated in the  official message of the National Security Agency, on April 18, the  investigator approved the prosecutor to suspend Sanasaryan of his  position, as was announced by the Prime Minister RA Nikol Pashinyan.  As a measure of restraint elected on his own recognizance. Sanasaryan  himself considers the case fabricated.

To note, we are talking about abuses that occurred during the tender  for the supply of dialysis equipment to medical institutions, in  which employees of the State Control Service are also involved. One  of them is arrested. According to media reports, he was the one who  testified against Sanasaryan.