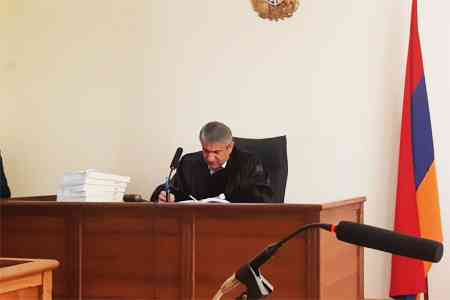 ArmInfo. The court of general jurisdiction of Gegharkunik region of Armenia, chaired by Judge Vardan Harutyunyan, on April 18 ruled to change the preventive  measure against Vahagn Manukyan, accused under three articles of the  RA Criminal Code. The latter was released from the courtroom before  the sentencing of the case.

The defendant was released on bail by the MPs of the National  Assembly Taguhi Tomvasyan from the faction of the My Step bloc and  Soghomon Soghomonyan from the Prosperous Armenia faction. To note,  Manukyan was charged at once under three articles of the RA Criminal  Code. One of these crimes is particularly serious. Manukyan is  charged under articles 34-104 (attempted murder), 34-177 (attempted  theft) and 235 (Illegal acquisition, sale, possession, transportation  or carrying of weapons, ammunition, explosives or explosive devices).

In an interview with reporters, when asked by ArmInfo's correspondent  about how a lawyer of GeoProMining Gold LLC Yervand Varosyan regards  this court decision, a lawyer said that such a decision was beyond  his understanding. "The court issued an illegal decision. I will  appeal against this decision in a higher instance. For me, the  position of the MPs of the National Assembly was also a surprise.  Indeed, they noted that one of them came to court on the basis of  distant kinship, and the other on the basis of a letter. It was also  very unexpected that the court submitted to their will, I say so,  because the court recently rejected a lawyer's request, "Varosyan  stressed.

He also stated that there was no justification for changing the  preventive measure. "Manukyan is charged with a particularly serious  crime (Attempt to kill - Ed. note) In addition, Manukyan opened  automatic fire on the security officers of GeoProMining Gold LLC, as  a result of which one of the guards received 3 gunshot wounds.  Moreover, this position of the MPs is green light for all those who  also want to rob the mine. Thus, the MPs, as it were, say: "You can  rob as much as you like, we are on your side." Moreover, in this way,  the state, in the person of the MPs, expresses its position towards  the subject, "Varosyan stressed.  The lawyer also stressed that, on  the part of the evidence, the charges against Manukyan are fully  substantiated. Since Manukyan himself admitted the fact that he was  in the field with weapons.

It is also noteworthy that one of the MPs, Soghomon Sogomoyanan,  arrived in court with a delay, for which the lawyer of GeoProMining  Gold LLC stated: "How can a person who cannot vouch for himself  arriving at a court on time can vouch for another person?".  In turn,  MP Taguhi Tovmasyan stressed that she is a member of the Commission  on Human Rights, and for her they are in the first place. "I don't  want to go deep into the essence of the accusation. I simply vouch  for the fact that until the sentence is passed, Manukyan will not  interfere with the investigation and will not try to avoid  responsibility. I trust this family, "Tovmasyan stressed. In turn,  the MP from the "Prosperous Armenia" Soghomon Soghomonyan said that  the case was fabricated.

"Naturally, I had previously studied the case materials, and I am  sure that Manukyan did not shoot, there is no evidence. Moreover, I  am sure that the case was fabricated," Soghomonyan stressed. Asked by  the correspondent of ArmInfo, whether the MP is familiar with the  defendant, Soghomonyan said he is not familiar. "But I know his  family, this is a very good, traditional family." As for whether the  MP is not afraid that Manukyan will try to hinder the investigation  or hide, after which Soghomonyan himself, as a person who vouched for  him, will have to be brought to court, the latter said: "I am sure  that he will not do Moreover, look at what wonderful children he has.  Do you really think that their father may try to avoid responsibility  ", theMPconcluded.  To note, according to the indictment, in 2016,  Manukyan, by prior agreement with Armen Grigoryan, with the  assistance of Manvel Melikyan with the aim of stealing a significant  amount of gold-bearing raw materials, penetrated the territory of the  Sotk deposit, developed by GeoProMining Gold.  To note, Grigoryan and  Melikyan were pardoned in November 2018. The security officers of the  field called the police, after which, when confronted by a law  enforcement officer, the robbers threw bags of raw materials, and  Manukyan opened automatic fire at the police officers and tried to  escape. However, one of the security service officers rushed after  Manukyan and stopped him, as a result, this man received 3 gunshot  wounds.  To recall, on November 1, 2018, the National Assembly of  Armenia adopted a draft law on the declaration of an amnesty, in  connection with the 2800th anniversary of Yerevan and the 100th  anniversary of the First Republic. On November 3, the bill was signed  by Armenian President Armen Sarkissian.