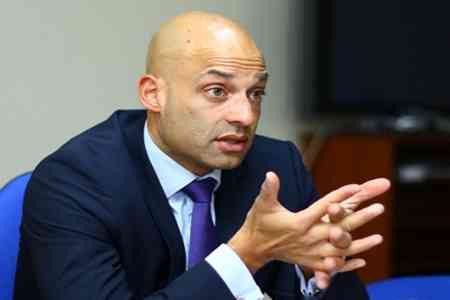 ArmInfo. The North Atlantic Alliance is going through a difficult period of pressure. The special representative of the NATO Secretary General in the South Caucasus  and Central Asia, James Appathurai, said this on March 12 at the  "NATO Partnerships: France's view' conference in Yerevan at the  French University of Armenia.

According to him, the so-called borders outlined after World War II  change, after 2014 a conflict situation arose. Appathurai recalled  that until 2014 between Russia and NATO was quite dynamic cooperation  in several areas. "And we hoped that our interaction would continue  in the same direction, but Russia chose a different path. What became  clear from one of the speeches of Russian leader Vladimir Putin in  2017," he said, adding that the annexation of Crimea, military  actions in the Black Sea, unfriendly rhetoric regarding NATO-Georgia  relations, the suspension of the Treaty on the Elimination of  Intermediate-Range and Short Range Missiles, INF, is not a complete  list of unfriendly actions of Russia in the recent period.

At the same time, Appathurai assured that the development of  relations with Russia continues to be important for NATO, and the  alliance hopes to see a positive trend in this direction.

"We consider development of relations with partners, assistance to  strengthen sovereignty in defense and security issues as an  alternative way to NATO. Another direction for us is to increase our  involvement in the processes in the Middle East, including Iraq and  its neighboring countries, due to threats emanating from ISIL, " the  NATO Special Representative said.

At the same time, Appaturai stated that NATO is actively reforming  today in order to better deal with modern threats, especially in  terms of cyber security. According to him, all member countries of  the Alliance are subject to cyber threats, and NATO is working  closely with the EU on this issue in order to more effectively deal  with this challenge.

According to the representative of the alliance, a lot of work in  peacekeeping in Afghanistan and Kosovo.  "At all meetings, I express  gratitude to the Armenian side for the contribution they make to  international peace and security," Appathurai said.

At the same time, he expressed the conviction that every country  should have the right of choice on one issue or another. "European  history has already demonstrated what can happen in the absence of  freedom of choice. But, as you know, Russia does not like the open  door policy of NATO and the European Union.  However, I am deeply  convinced that cooperation should continue, including with Russia,"  he said.

Commenting on the intention of Europe to form its own army,  Appathurai expressed the conviction that there is no equal in the  matter of ensuring protection of NATO, and we need to approach this  issue in such a way as to avoid dubbing. He also believes that today  there is serious pressure on Europe from both the United States and  from within.