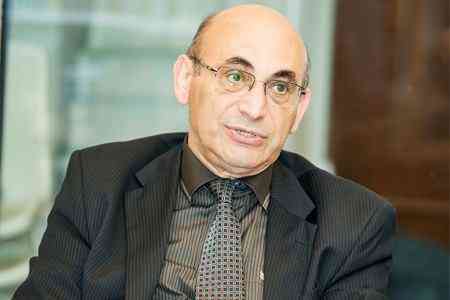 ArmInfo.Political scientist Arif Yunusov, Head of Department of Conflict and Migration Studies  in Institute for Peace and Democracy, who received political asylum in Netherlands, comments in an interview to ArmInfo on the recent impulses related to Karabakh settlement. He forecasts the most possible scenarios of the situation development, shares his view of the role and goals of external factors in the Karabakh settlement.

Mr. Yunusov, judging from the statements of Yerevan and Baku the approaches of the sides have not changed at the background of certain activation of the process, although the foreign ministers met 5 times in less than a year and the heads of state 3 times. In this light can it be assumed that the Karabakh negotiation process has entered a so-called Cyprus path and now the negotiations towards peace will last for decades?

For me personally, it became clear after the signing of the so-called «Contract of the Century», when geopolitical players appeared in the region. Prior to that, the West did not pay intensive attention to our region, tacitly considering it as a sphere of influence of Russia. But later, when large investments began to be made in the energy resources of Azerbaijan and the real geopolitical confrontation between the West and Russia in the region began, the Karabakh conflict lost its status of internal Armenian - Azerbaijani conflict.

And since the interests of the geopolitical players differed sharply, it became clear that this would inevitably affect the negotiating process of the conflicting parties. And when the Baku-Ceyhan oil pipeline was launched,  it became finally clear that in the negotiation process there are few chances for serious progress. It also became obvious  that the proposals made by the co-chairs will remain on paper until the geopolitical situation in the region changes. An additional factor was that Armenians and Azerbaijanis are not tired of the conflict.

Continuing to constantly talk about the desire to resolve the conflict peacefully, each side interprets the phrase “just and peaceful settlement”  in its favor. Armenians and Azerbaijanis have traveled only an insignificant part of the path leading to the real negotiation process. As a result of the above-mentioned the negotiation process is more likely to be an imitation, when the positions of the conflicting parties  sharply contradict to each other, however geopolitical players will not allow a big war between them considering a number of reasons. There may be regular escalations of the situation at the front line for 2-5 days  including military actions, but they will not be allowed to launch a  large-scale war. And such a situation may continue for quite a long time...

In order to realize that the April 2016 war has led to a further strengthening of Moscow’s position in both Armenia and Azerbaijan, it is sufficient to estimate the volume of Russian arms supplies to parties to the conflict in the recent two years. In your opinion, are the latest impulses in the negotiation process a consequence of the efforts of the West, primarily the United States, to bring the negotiations back to the OSCE Minsk Group and prevent the possibility of a new escalation of the conflict in the future?

It should be admitted that today Russia is the one to be more active in the region. And it is not by chance that Armenia and Azerbaijan listen more to its opinion. And Aliyev’s first meetings with Pashinyan in Dushanbe and St. Petersburg took place largely due to Russia, let's not forget about it. At the same time,  Western countries do not completely lose sight of our region. And this was reflected on the meeting at the beginning of this year of the foreign ministers and the preparations for the meeting between Aliyev and Pashinyan at the official level in the framework of the negotiation process.

On February 1, in Berlin, Prime Minister Nikol Pashinyan made a political statement during negotiations with the German Chancellor Angela Merkel - any settlement option should be acceptable to the peoples of Armenia, Karabakh and Azerbaijan. It is clear that even “renewed” Ilham Aliyev (not least because of the change of power in Armenia) is unable to make a similar statement. Thus, the inability of Baku to oppose this line, is something new that goes beyond the multi-year theses on territorial integrity, creates a qualitatively new situation advantageous for the Armenian parties to the conflict. Isn't it time for Baku, in your opinion, to change the strategy?

Actually, I see nothing new here. All the predecessors of Pashinyan said the same. In turn, the concept of official Azerbaijan in the negotiation process was formed by the father of the current president, Heydar Aliyev. Once, official Baku, including Heydar Aliyev, had contacts with the authorities of Nagorno-Karabakh and the truce of 1994 was concluded exactly this way, with the participation of three parties. But then Heydar Aliyev began to reject the role of Nagorno-Karabakh in the conflict, and today this is  the position of official Baku. At the same time, the Azerbaijani authorities also constantly assure that after Armenia and Azerbaijan solve all the problems between themselves, then, of course, Nagorno-Karabakh will become part of the negotiation process. But not earlier. And for now I do not see any prerequisites that this line will change.

Due to a number of factors, the main catalyst for the intensification of negotiations around Karabakh is the growing interest of the US Administration in the South Caucasus. This was reflected, for example, in the Caucasian visit of the adviser to the President of the United States on national security John Bolton. It seems that the United States is seeking to bring the Karabakh process out of the deadlock precisely with the goal of reducing the dependence of Yerevan and Baku on Moscow. There is an opinion that it was precisely due to Moscow that the conflict was driven into the status quo, which corresponds to its interests even more than, perhaps, the interests of Armenia. And for the US, Armenia and Azerbaijan are only interesting as Iran’s neighbors ...

Let`s be pragmatic - the president of the United States is Donald Trump, who is clearly not inclined to deepening the conflict with Russia. Quite the contrary. For Trump, the Karabakh conflict is a trifle that he does not intend to think particularly about. Iran is another matter. Everything here is much more serious for him and therefore the current US administration views our countries only as neighbors of Iran and in the context of their future relations with official Tehran.

The Azerbaijani authorities have repeatedly voiced the desire for a new strategic relationship with the United States, following the example of Kazakhstan, which signed the “Agreement on Enhanced Strategic Partnership” with Washington, which has given the country the status of a strategic partner of the United States. And if this status of Kazakhstan allows the United States to include this country in the global projection to contain China, then in the case of Azerbaijan, the question, first of all, is about deterring Iran. Are such prospects real and do they correspond to the interests of Azerbaijan?

The American policy of deterring Iran is not new; in the mid-1990s, the United States tried to use the territory of Azerbaijan in this regard. But this more than once led to the aggravation of Iranian-Azerbaijani relations. Moreover, in 2001, Azerbaijan and Iran were even on the brink of war — Iranian fighters began to regularly violate the airspace of Azerbaijan. And only the harsh statements of the United States, and military aid to Turkey, then stopped the escalation. But Iranian-Azerbaijani relations remained complex, and the Americans even began to supply ships and military equipment to the Caspian Sea and not only. That is, there is no novelty here either, and Azerbaijan stands between the United States and Iran, and this, of course, is not in the interests of Azerbaijan. Therefore, the example of Kazakhstan is not perceived as positive in Azerbaijan. Quite the contrary. The task of official Baku is to manage not to spoil relations with both the United States and Iran.