Political technologist:  Whatever force comes to power in Armenia, it  will be pro-Russian, based on the current realities 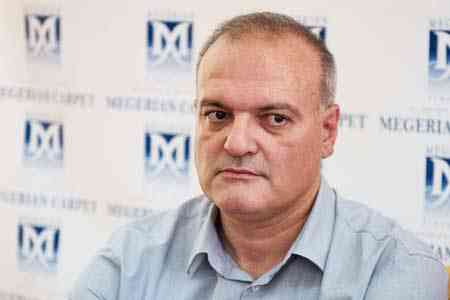 ArmInfo. In the upcoming parliamentary elections in Armenia in December, the ruling My Step bloc will gain from 65% to 75% of the votes (according to Gallup, the  figure is 68.7%, ed.). This forecast was made today by political  strategist Vigen Hakobyan at a press conference.

According to him, the "Prosperous Armenia" party in the parliament  will take second place in the order of 10% of the votes ("Gallup"  predicts 6.7%, ed.). As for the chances of the rest of forces, the  expert found it difficult to make a forecast.

At the same time, he said, the election campaign will not unfold  around the ideology and programs of political forces. Although, in  his opinion, the foreign policy of the political forces will be a key  issue of the electoral debate. He noted that, for the time being,  mainly political forces with a pro-adaptive one are participating in  the elections, but, remarkably, not with an anti-Russian orientation.  "However, the key is the fact that whatever force comes to power in  Armenia, it will be pro-Russian, based on the current realities," the  expert said.

As for the Republican Party, according to Hakobyan, it will  purposefully work for the targeted electorate of Nikol Pashinyan's  radical opponents and his team. "In this context, the RPA will find  it difficult to carry out its maximum program (it seeks to become the  second force in parliament), but it can still ensure minimal  representation in parliament if it does not break halfway through  election campaigning due to great public pressure and pressure from  the authorities" - summed up the expert.