A new stage in cultural and educational life of Gyumri has been  launched: An organ has been established in Gyumri church with support  of Pernod Ricard and "Ararat" YBC (video) 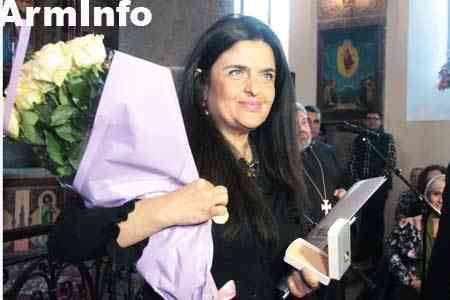 ArmInfo. On November 3, a presentation of an organ was held in the Surb Nshan church in Gyumri. The instrument was produced by the famous Alsatian Rotinger dynasty, whose history of organ construction goes back over 250 years. The  organ was delivered from Europe to Gyumri with the support of an  international company, the world leader in premium spirits Pernod  Ricard and its member ''ARARAT'' Yerevan Brandy Company .

The instrument was purchased from a private collection. It is  symbolic that the famous French composer, organist Olivier Messiaen,  had played the organ. The initiative to establish an organ in the  second largest city, the cultural capital of Armenia, belonged to a  native of Gyumri, currently a resident of France, president of the  Friends of Gyumri. France Union, winner of prestigious international  awards, organist Narine Simonyan. On the occasion of the presentation of the organ set up in the Surb  Nshan church, a concert of sacred music was held, during which  performed the world famous opera singer, soprano Hasmik Papyan, young  singer, Narine Simonyan's daughter Satenik Shagazizyan, organists  Narine Simonyan, Mari Muller, Arthur Adamyan and choir ''Radio  Martam''. To note the legendary Armenian ARARAT brandy is produced at the  Yerevan Brandy Factory according to the traditional technology, the  foundations of which were laid in 1887 by brothers Vasily and Nerses  Tairyants. Only high-quality Armenian grapes of endemic varieties and  crystal clear spring water are used in production. The precious  cognac spirits of ARARAT are aged in barrels of century-old Caucasian  oak, made in the Plant's own cooperage workshop. In 1998, Yerevan  Brandy Company entered the international company Pernod Ricard the  world leader in premium alcohol.