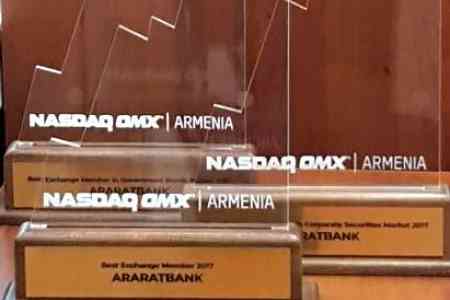 The report notes that ARARATBANK also provides intermediary and  depositary services to its customers.  ARARATBANK has been acting as  the government agent of the RA Government since 2007.  The award is  held for the 9th year in a row. This time, the NASDAQ OMX Armenia  Stock Exchange and the Central Depository of Armenia summed up the  results of the 2017 Best Stock Exchange Competition.  To select the  winner, the number, volume and effectiveness of transactions  concluded at NASDAQ OMX Armenia platforms are taken into account. The  best dealer of the market is chosen on the basis of a general vote of  the dealers of banks and investment organizations of Armenia, which  are members of NASDAQ OMX Armenia.

To note, by the number of issued corporate coupon bonds, ARARATBANK  leads on the Nasdaq OMX Armenia exchange. Some of them have already  been redeemed, but as of October 23, 2018, there are 8 tranches of  ARARATBANK bonds listed on the stock exchange: 6 dollar and 2 dram.  The total amount of the issue of 6 dollar issues of ARARATBANK bonds  quoted at the exchange today is $ 23 million, and 2 dram bonds - 2  billion drams. Redemptions on these issues are dated to 2019-2022,  and in 2019 the circulation period of 2 dollar tranches (in June and  October) and one dram (in December) expires.  To recall, ARARATBANK  OJSC has been operating since November 2005. Majority shareholders of  ARARATBANK as of July 1, 2018 are one of the largest oil traders in  Armenia- Flash company with a share of 72.73% in the capital, Barsegh  Beglaryan (well-known entrepreneur, the head of Flash) 18.33%, Rural  Impulse Fund II (included in the structure of the Belgian Incofin  Investment Management - Incofin IM) - 8.58%. As of July 1, 2018 by  the coverage of the branch network, ARARATBANK is in the TOP-3, with  a total of 61 subdivisions, of which 30 are located in Yerevan, 29 in  the regions of Armenia and 2 in the NKR.