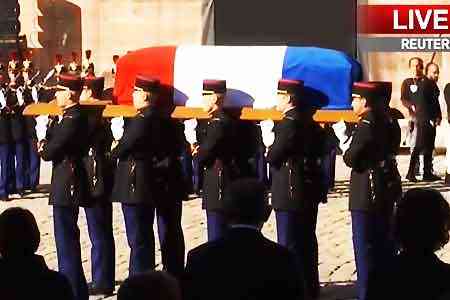 ArmInfo. A memorial service and a national tribute to the memory of Charles Aznavour are being held at the House of Disabled in Paris. French President Emmanuel  Macron and also Armenian Prime Minister Nikol Pashinyan spoke at the  ceremony. Charles Aznavour is the first musician with whom France  says goodbye to such solemnity.  Armenian President Armen Sarkissian,  Catholicos of All Armenians Garegin II, high-ranking French  officials, prominent figures of art and culture also take part in the  ceremony.

Aznavour died on the night of October 1 at his home in southern  France. According to Aznavour's last will, he will be buried in  France near his parents. The farewell ceremony is scheduled for  Friday-Saturday, the funeral will be held on October 6.

On the day of Aznavour's funeral in Armenia and Artsakh, mourning is  declared, liturgy will be served in the churches of the two Armenian  republics.