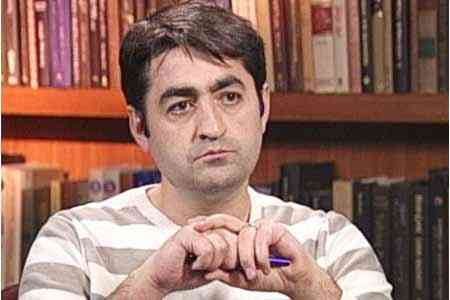 ArmInfo.Adviser to Armenian Prime Minister on Foreign Policy Issues Arsen Kharatyan in an interview to ArmInfo comments on the recent events in Armenian-Russian relations. He declares the main foreign political vectors of the Armenian government noting that there are no intentions of any drastic changes. He shares his vision of Artsakh conflict settlement, Armenian government's stance on Stepanakert's return to the negotiations table.

In response to journalists' request to comment on the decisions on arresting Robert Kocharyan and Yuri Khachaturov, Russian Foreign Minister Sergey Lavrov stated that "As an ally, Russia has always been interested in stability in Armenia. So recent developments are a cause for concern'', does Moscow really have reasons for such a concern?

Our allies should not have any reasons for concern. In any case, the logic of development of our allied relations testifies to it. After the change of power in Armenia, Prime Minister Nikol Pashinyan has repeatedly noted that there are no dark corners in the Armenian-Russian relations, we openly and intensively communicate with our Russian counterparts, which is reflected in the frequency of mutual visits, the efforts of the new Government aimed at ensuring consistency in the development of Armenian-Russian cooperation in a variety of sectors. Consequently, all our agreements with Russia are well known to everyone, there are no secrets. Of course, we do not disregard that in the conditions of cardinal renewal of Armenian government, it will take some time to establish new communication links. However, in my opinion, this issue will be resolved with joint efforts in the very near future. I would consider the given issue from this perspective.

However, many Russian and, surprisingly, even Armenian media sources and representatives of expert community considered the situation of CSTO Secretary General’s replacement as a scandal and even a crisis in Armenian-Russian relations, How do you assess the current phase of relations with Russia?

I by no means assess the situation related to the CSTO Secretary General as a scandal or crisis. I would like to once again draw attention to a fundamental point, that this process is a domestic issue exclusively. The Armenian government attaches special importance to the development of cooperation within the CSTO framework and to strengthening the Organization as an effective regional structure, which is aimed to provide guaranteed security conditions for the development of the member states. By focusing on the task of excluding any influence of this process on the activities of the Secretariat, of which we have informed our CSTO partners, as well as the Secretariat itself, we have initiated a number of steps, the first of which is the initiative to withdraw the powers of the current Secretary General. I am sure that all the member states of the Organization are interested in the differentiation of internal factors from external ones and will support operative procedure proposed by us. In this issue there is a quite legal process, through which we currently undergo.

In 2017, when candidacy of the incumbent Secretary General was approved his term was set until May 2020. Initiating early termination of his powers will you name the new candidate?

Candidate is proposed through official channels.

Let me ask a clarifying question. When making this or that decision related to CSTO, does the Armenian government consider possible acceptability of a decision for all the countries of the Organization, for Russia first of all?

Of course, in all our decisions we consider and take into account all those aspects important for the organization. And the Prime Minister with all of his advisers and other bodies involved in the process certainly take into account the aspect mentioned by you.

Generally, a new trend has spread worldwide- many of the decisions in the foreign policy are made based on domestic political situation, by other words on society's desires. Do you see any such context in Armenia's foreign policy especially related to the latest arrests of the former and even incumbent high-ranking officials?

10 people were killed on Yerevan streets on March 1, 2008, more than 200 were injured, a lot of people were detained. In my opinion, the case of March 1 is an exclusively internal problem faced by Armenia. And its solution is important both for assessing the past and for the future of Armenia. It is for this reason that we consider the case of March1 and all the relevant processes exclusively as internal issue not connected to the foreign policy.

By now Armenian's new head's contacts with the Azerbaijani leadership have been limited to his acquaintance with Ilham Aliyev. Has there been any other progress in Karabakh process?

I would like to recall, that there was also a meeting of the Armenian and Azerbaijani foreign ministers in Brussels, as well as their meeting with the OSCE Minsk Group co-chairs. We continue to state that we are ready to discuss exclusively peaceful settlement of the Karabakh problem within the OSCE MG co-chairmanship mandate. In my opinion it is quite clear what we mean by expressing this stance.  As for the possible progress in negotiation process by now it has been limited to the two meetings of Armenia and Azerbaijan's FMs in Minsk and Brussels. At the same time I would like to recall that the Karabakh settlement came to a standstill not yesterday and not as a result of shift of power in Armenia.  The peace process has been stuck for a long time already.

Armenia's Prime Minister in fact made a statement on the need of Artsakh's return to the negotiations process. Are concrete steps taken to bring this statement into life?

As a native of Armenia, Prime Minister has repeatedly stated of not having any own position in Artsakh. It is for this very reason that expressing his readiness to continue the peace process with Azerbaijan, Nikol Pashinyan stressed his intention to represent Armenia exclusively. In my opinion, such a stance is quite logical. If we want to achieve lasting and stable peace, if we want to solve the problem, Artsakh cannot but be a part of this process. All these approaches have been voiced and announced by official Yerevan. Thus, as soon as an environment needed for progress in negotiation process is established it will become clear how and in what direction these approaches should be promoted.

Could you please present the main existing or planned vectors of changes in foreign policy of the new Armenian government?

One should not expect any significant changes in Armenia's foreign policy. In fact this has been repeatedly reaffirmed on the very high level. We will continue to develop the announced policy on enhancing Armenia's relations both on bilateral and multilateral levels. The matter concerns to allied cooperation with Russia, partnership in the framework of CSTO, EEU and CIS, Armenia's agreements with the European Union within CEPA, and, of course, our relations with the American, Asian and Middle Eastern countries.  There are no prospects for major changes in Armenia's foreign policy. The transformations Armenia has undergone were exclusively internal political changes and there is no geopolitical context in them. In this light the statements made by Armenia's Prime Minister on no change in foreign political vectors confirm the policy adopted initially. Relations and priorities established by Armenia in foreign policy are not short-term but deep ones. The new government has just set a goal to increase their efficiency aimed at development of the country and raising the level of citizens' well-being.

You have once again confirmed that there are no changes in the foreign policy. However, there is a certain skepticism in Russian public about Armenia's headship and this skepticism sometimes reaches such a scale that even ''Soros influence'' is seen in Yerevan's foreign policy. Аs a person participating in the negotiations do you feel any of such skepticism directly from the Russian counterparts?

I can say that all the talks with our partners have always been characterized with clear and definite stances, which are all voiced not depending on the communication platform. This relates to the Russian counterparts as well. This aspect is crucial for as, and has repeatedly been voiced by the Prime Minister.  However, the Armenian government is new, consequently we are new faces, first of all we should adapt to the existing realities. I think that our partners should also realize this. Within this framework there is a progress and it will continue. Efficiency of the joint work depends on the level of communication. We realize that and work to this end. Back in the very beginning of the process that took place in Armenia in April-May this year Russian leadership had expressed in general quite a loyal attitude to the developments. We highly appreciate that and attach great importance to such an attitude. However, the fact that we intend to continue and develop our allied relations with Russia does not mean that we do not have issues that should be resolved. Most importantly, all of these issues are solvable through dialog. Dialog has been opened and in order everything becomes clear for everyone and for us also just a little time and interaction is needed, in which we are interested. Open, efficient dialog is a crucial segment of solving the issues.  Admitting that there are issues that should be solved jointly is already a basis for their solution. Armenia and Russia have a long history of relations. Ultimately, the crucial changes that took place in the Armenian domestic life are aimed to make Armenia stronger inward so that it develops relations with its partners on a qualitatively new higher level.