MP from Tsarukyan faction Vardan Bostanjyan lays down his mandate 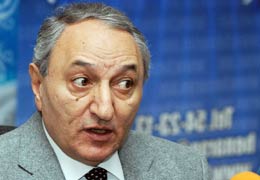 ArmInfo. An MP from the Tsarukyan faction, head of the Commission on Culture, Education, Youth and Sports Vardan Bostanjyan submitted an application to the  Speaker of the parliament Ara Babloyan to lay down his mandate.  According to the rules of the National Assembly, if the MP does not  withdraw his application, his powers are considered terminated.

To note, the official reason for Bostanjyan's decision is not known.  However, the political circles do not exclude that the reason was  Bostanjyan's statements about the arrest of the second president  Robert Kocharyan, which differed from the official position of the  Tsarukyan bloc. Bostanjyan, in particular, considered the arrest of  Kocharyan a severe preventive measure, and said that the second  president was subjected if not to political persecution, then, at  least, to the persecution.

Meanwhile, the MPs from the Tsarukyan bloc, whose main force is the  Prosperous Armenia party established by Kocharyan, said that the  process is considered exclusively in the legal framework, and they do  not intend to make political statements in connection with the  situation.