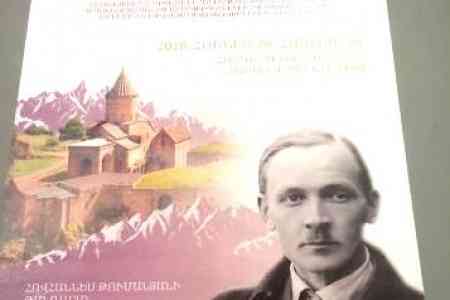 ArmInfo. Within the framework of solemn events in honor of the establishment of the 25th anniversary of diplomatic relations between Armenia and Belarus, June 28 in the  Museum. Hovhannes Tumanyan opened the exhibition of the great Belarusian poet Yanka Kupala, entitled "To the land of mountains and stormy rivers:"

"This exhibition will undoubtedly strengthen the cultural ties  between the Armenian and Belarusian peoples and between our museums,"  the chief curator of the museum's foundation told ArmInfo. Hovhannes  Tumanyan Marina Baghdasaryan. She noted that the museum. Tumanyan  received an invitation from the Belarusian side to present the  exposition at the Kupala Museum.

At the opening ceremony of the exhibition there were representatives  of many foreign diplomatic representations, deputies, artists, art  critics. The Ambassador of Belarus to Armenia Igor Nazaruk addressed  the audience. The Belarusian side invited the Tumanyan Museum to open  the exposition at the Yanka Kupala Museum in Minsk.