Yerevan's response to Erdogan: Arrive in Yerevan and be made aware of Armenian Genocide facts 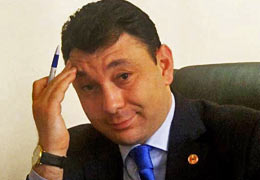 To recap, Turkish President Recep Tayyip Erdogan has recently urged the Armenian Diaspora to prove its Genocide claims by bringing out documents to support them. The Turkish president said Turkey's archives are open.

Eduard Sharmazanov reminds Erdogan that the best proofs of the Armenian Genocide in the Ottoman Empire are in the Western Armenia. These are thousands of Armenian churches and communities destroyed and desecrated by the Turks, millions of Armenians deported from their historical motherland, and the multi-million Diaspora in the world.
"The best evidence is the Deir ez-Zor desert where hundreds of thousands of Armenian women, children and elderly people died. The secret decision of the Young Turks government, and the May 24, 1915 statement by the Entente condemning Turkey's crimes against Armenians and the entire humanity," Sharmazanov said.