Serzh Sargsyan: Armenia determined to continue with implementation of reforms as part of cooperation with EU 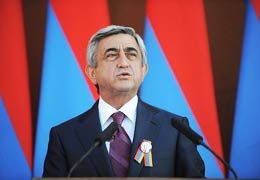 "Armenia is determined to continue with the implementation of the deep and large-scale reforms aimed at fighting corruption, ensuring free economic competition, raising transparency of government activities, safeguarding the independence of judiciary, guaranteeing freedom of speech, and strengthening the civil society, which constitute the pivot of Armenia-EU relationship," said Armenian President Serzh Sargsyan in his speech at the ongoing third Eastern Partnership Summit in Vilnius.

"We have reconfirmed our commitment to drive through the reforms underway in our countries by the Joint Declaration to be adopted by the Vilnius Summit," the president said.

Building and strengthening Armenian nationhood upon European model has been the conscious choice of ours, and that process is hence irreversible, he said.

"The Eastern Partnership enabled us to give new impetus to the modernization efforts to our state and society upon the principles of democracy, human rights and rule of law. It stimulated the agenda of our wide-scale reforms. Let me merely refer to the last three general electoral processes to demonstrate the measurable outcomes that raised the benchmark in this area and significantly strengthened the Armenian electoral system," the president said.