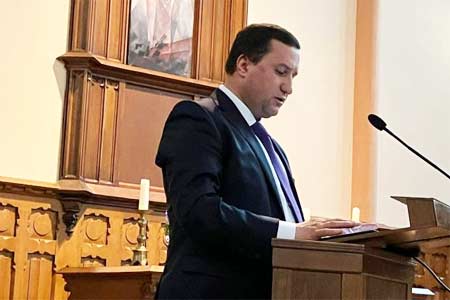 ArmInfo. The issue of Azerbaijan's genocidal steps was raised at a profession discussion in The Hague, according to an official report.

Armenia's Ambassador to the Netherlands Tigran Balayan, at the  invitation of the Embassy of Luxemburg, participated in the 21st  annual session of the Assembly of States Parties (ASP) to the Rome  Statute of the International Criminal Court in the Hague, which  opened on December 5 to last until December 10.

Ambassador Tigran Balayan noted that the current developments  resemble the situations in the early 20th century, when the  international press and foreign diplomats working in the Ottoman  Empire were writing about the Armenian massacres, but the Ottoman  authorities continued the mass killings as they were sure they would  never be punished.

At the highest level, the Azerbaijani authorities are committing  daily gross violations of the injunctions by the International Court,  stirring up hatred for Armenians, threatening with further violence,  destructing the Armenian heritage. "And they are sure of being  unpunished," he said.

Applying double standards by the international actors leads to  disastrous consequences, which interfere with the lives of millions  of people round the world, Mr Balayan said.