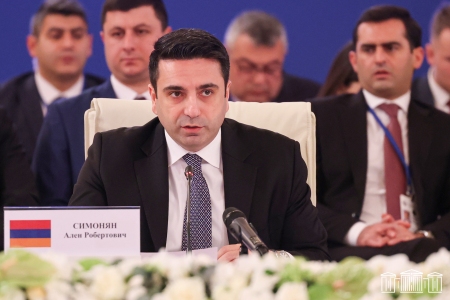 ArmInfo.Since the last meeting of the CSTO PA, the military-political situation in the South Caucasus region has deteriorated; there are also developments that  undermine stability and regional security. According to the press  service of the parliament, on December 5, President of the National  Assembly of Armenia Alen Simonyan stated at a meeting of the CSTO  Parliamentary Assembly.

He spoke in detail about the military actions carried out by the  Azerbaijani armed forces that invaded the territory of Armenia in  September, recalling that at the new stage of aggression, the  Azerbaijanis occupied part of the sovereign territory of the Republic  of Armenia. The speaker stressed that the militant rhetoric of  official Baku demonstrates the future expansionist ambitions of  Azerbaijan. , the President of the National Assembly  of the Republic of Armenia said.

He stressed that today the armed forces of a third country are in the  CSTO area of responsibility, and he does not know how this can be  explained and how the partners see the continuation of this  situation, when Azerbaijan violates the ceasefire regime almost every  day, causing casualties. The head of the RA Parliament assured that  Armenia has never made statements about withdrawing from the CSTO,  but it was said that the CSTO is leaving the region, which worries  our country. "Today we are faced with the task of protecting the  population of Nagorno-Karabakh. Azerbaijan began to declare that the  problem of Nagorno-Karabakh no longer exists, as well as the  indigenous Armenian population of Nagorno- Karabakh. A few days ago,  the Azerbaijani Defense Ministry demanded that Russian peacekeepers  not use the Nagorno-Karabakh and Armenian toponyms. Moreover, we see  the intention of the Azerbaijani side to close the Lachin corridor.  The Lachin corridor is the only full-fledged road of humanitarian  importance for the life support of the Armenians of  Nagorno-Karabakh," stressed Alen Simonyan.

The speaker noted that the efforts and steps taken by Armenia  practically confirm Armenia's commitment to a peaceful settlement of  all issues related to the conflict, including ensuring the rights and  security of the Armenians of Nagorno-Karabakh.