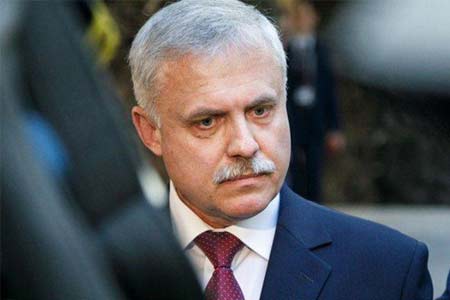 ArmInfo. The situation on the Armenian-Azerbaijani border remains permanently complicated. There are shootings every day. CSTO Secretary General Stanislav Zas  stated this during his speech at a meeting of the Council and the  15th plenary meeting of the Parliamentary Assembly of the Collective  Security Treaty Organization in Moscow.

"In accordance with the appeal of the Prime Minister of the Republic  of Armenia Nikol Pashinyan, this topic was discussed three times at  extraordinary meetings of the CSTO CSC. On behalf of the heads of  state, a monitoring mission led by the Secretary General and the  Chief of the Joint Staff of the Organization worked out in Armenia.  Based on the results of the work, a draft CSC Decision " On joint  measures to provide assistance to the Republic of Armenia" was  prepared, which was considered at the session of the Council on  November 23 this year," he noted.

At the same time, he stated that due to differences in the positions  of the CSTO member states, it was not possible to adopt this project.  "I hope that after its subsequent revision, we will reach a" package  "adoption of two complementary documents: "the Decision on Assistance  to the Republic of Armenia" and "the Statement of the CSTO Council of  Foreign Ministers in Support of Efforts to Achieve Peace in the South  Caucasus Region"," Zas summed up.  It should be noted that after the  Azerbaijani large-scale military aggression against the sovereign  territory of Armenia on September 13-14, official Yerevan turned to  Russia, the CSTO and the UN Security Council for military assistance.  In order to assess the situation, the CSTO sent a mission to Armenia,  which was entrusted with the function of assessing the situation and  developing a set of measures to provide assistance. Later, the  Russian side announced that the CSTO was ready to send a monitoring  mission to the border if the CSTO CSC approved this measure.  Meanwhile, Yerevan stated that it expects a targeted political  assessment of the occupation of Armenian territories from the CSTO.

On November 23, a meeting of the CSTO CSC was held in Yerevan, at  which a decision was to be made on rendering assistance to Armenia.  However, the Prime Minister of Armenia refused to sign the draft  "Declaration of the Collective Security Council of the CSTO and on  joint measures to provide assistance to the Republic of Armenia."  "The CSTO's lack of a clear political assessment of the situation and  failure to adopt the above-mentioned decision may mean not only the  CSTO's abandonment of its alliance obligations, but also Azerbaijan's  interpretation of this as a green light by the CSTO for further  aggression against Armenia. And this is contrary not only to the  letter, but also to the spirit and the meaning of the fundamental  documents of the CSTO," he said during a speech at a meeting of the  CSTO CSC in Yerevan, adding that he was not ready to sign the  document in this form.