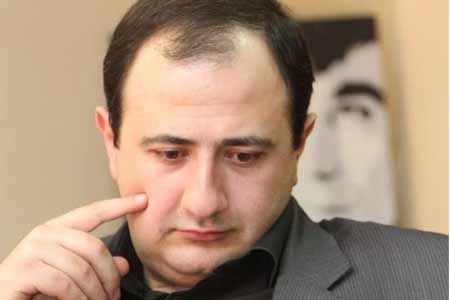 ArmInfo.Dean of YSU Faculty of Oriental Studies, Candidate of Philology, Associate Professor Ruben Melkonyan will not take a parliamentary mandate from the  "Armenia" opposition faction. He announced this on his Facebook page.

"Dear compatriots! In 2020, after a nationwide catastrophe, it became  more necessary than ever to consolidate the knowledge and skills of  different sections of society in the name of statehood and prevent  its destruction. Being and continuing to remain a non-partisan, I  decided to use my professional knowledge, in addition to the  scientific and educational sphere, for more practical service,  including in the political arena. Based on this, in 2021 I took part  in the parliamentary elections on the list of the "Armenia"  opposition bloc, which is an alternative to these authorities. It was  not only a political, but also my civic step, " Melkonyan noted.

He added that there were no changes as a result of the elections in  Armenia for various reasons. The expert stated with regret that the  predictions of many experts that the preservation of the current  government does not promise any positive prospects for Armenia have  come true and continue to come true, and the current situation is the  best proof of this.

"The forces of the opposition, seeking to change the situation, for  various reasons, could not succeed. I do not want to assess those  actions in the development and implementation of which I did not  participate, but this process and the current form of work are  generally incomprehensible to me, and I believe that the steps taken  to achieve the ultimate goal are incommensurable with the realities  at the moment.

Moreover, in today's National Assembly and in the current situation,  I consider my possible activity as a MP to be inappropriate, since I  consider its usefulness for our state to be either zero or  insignificant, so I decided to resign,. I do not want to participate  in self-governing processes," Melkumyan added, saying that on  December 6 he would submit an application to the CEC to resign as MP.

Earlier, three MPs of the "Armenia" faction stepped down.