To achieve peace, we need to be strong and united - Ruben Vardanyan 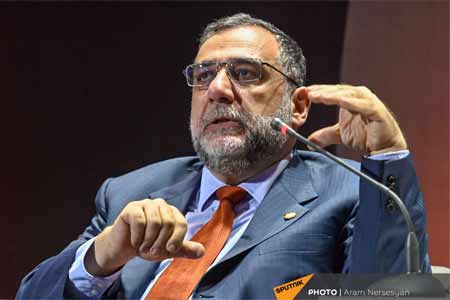 ArmInfo. State Minister of the Republic of Artsakh Ruben Vardanyan today held a working meeting in the administration of Askeran region, got acquainted with the  existing urgent problems.

According to the press service of the NKR government, the head of the  administration, Hamlet Apresyan, considered the security problem a  priority, noting that this causes serious damage to agriculture and  deprives people of the vital necessities for life, since a  significant part of cultivated land and pastures is under the direct  gun of the enemy. The meeting also raised the issue of operational  communication and effective cooperation between the community -  administration - ministries.  Emphasizing the effective organization  of work, Vardanyan noted that it will be possible to face new  challenges only through disciplined and organized work. For this very  reason, a mechanism has been introduced for meetings with heads of  administrations on a daily basis, which makes it possible to hear  from them personally about the situation and urgent problems.

During the visit, the state minister also met with the leaders of the  communities of Askeran region, heads of institutions and enterprises  of the region, listened to the problems raised by them, which mainly  concerned security, civil defense, housing problems, repairs of  schools, roads, etc.

Speaking about the security issue, the Minister of State noted: "The  possibility of establishing peace lies only in our strength and  unity. No agreement can solve this issue, since we have a neighboring  state that does not want us to live here. We must become strong,  united so that they cannot resolve the issue in a way that is  unacceptable to us. We must continue our struggle on all fronts:  diplomatic, military, political, informational. We must be vigilant  and ready."

Speaking about the incident with the blocking of the  Stepanakert-Goris road, Ruben Vardanyan noted that one should be  prepared for such provocations.

"We have to fight with all means, because the situation is like this,  this reality requires completely different approaches from us, not  only in terms of diagnosing problems, making decisions, but also in  terms of our attitude in general. We are facing very serious dangers  and challenges, but I am sure that we will overcome them. Our  struggle for the right to live on our land, for the future of our  children continues. And this is the struggle of all Armenians," he  concluded.