Former defense minister: Azerbaijan`s provocations will continue in  the future 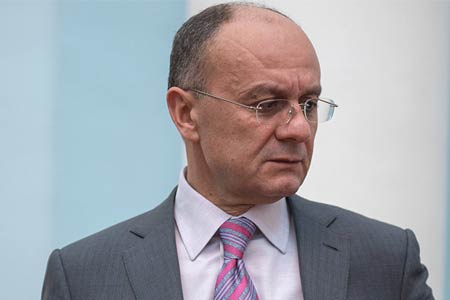 ArmInfo. After the 44-day war, Azerbaijan regularly continues provocations and pressures on the Armenian sides. On December 5, head of the "Armenia" parliamentary  faction, former Minister of Defense of the Republic of Armenia Seyran  Ohanyan, stated this to journalists, commenting on the closure of the  only road linking Armenia with Artsakh by the Azerbaijanis.

According to the former minister, a clear example of this pressure is  the document adopted on November 8 by the Milli Majlis of Azerbaijan,  which was discussed on December 2 at an extraordinary meeting of the  RA National Assembly.

In fact, Ohanyan continued, Baku made it clear that it was it who  launched military operations against Artsakh, and subsequently  against Armenia, justifying them.  Azerbaijan is also trying to  distort the essence of the Artsakh problem by presenting the Armenian  people as an aggressor. "Meanwhile, we see that Baku is the aggressor  in this situation. The most important thing is that Azerbaijan  continues these pressures, announcing that it will submit to the  Armenian side a proposal to conclude a peace treaty, consisting of  five points, otherwise threatening to go to the end, up to the  implementation of its conditions for the opening of the so-called  Zangezur corridor>, Ohanyan emphasized.

The former minister of defense noted that provocations like the one  that took place on December 3 will continue in the future.

It should be noted that on December 3, in the afternoon, the  so-called Azerbaijani environmentalists, in fact the Azerbaijani  servicemen, blocked the only road providing communication between  Artsakh and Armenia. They argued this by the fact that environmental  standards are allegedly violated in Artsakh. Russian peacekeepers,  after three hours of negotiations, managed to unblock the highway. As  the former minister noted, a few days ago, the Azerbaijani side made  a statement that weapons and ammunition were allegedly transported  along this road, which, according to Ohanyan, was the basis for  conducting large-scale control over this corridor. Meanwhile, as the  MP recalled, based on the tripartite statement of November 9, 2020,  this corridor should be with the appropriate width. "On December 2,  we presented our version of the NA statement, which contained the  condemnation of Azerbaijan's actions. In this document, we presented  three points that are necessary - the right of the people of Artsakh  to self- determination, the concept of the Republic of Artsakh and  the obligations of Armenia towards Artsakh, which were not accepted  by the ruling majority. It seems to them that the use of  abovementioned terminology may lead to new Azerbaijani provocations,  which, nevertheless, have not stopped," Ohanyan emphasized, adding  that it was not the opposition, but the current government itself,  that should have come up with a legislative initiative to hold an  extraordinary meeting. As for Azerbaijan, as the former minister  emphasized, it takes advantage of the unregulated borders, the  still-unrestored Armenian army, and continues to calmly continue its  provocations. "If they get punched in the face at least once, they  will never repeat these provocations," Ohanyan said