Lavrov: Another meeting under 3+3 platform is being prepared 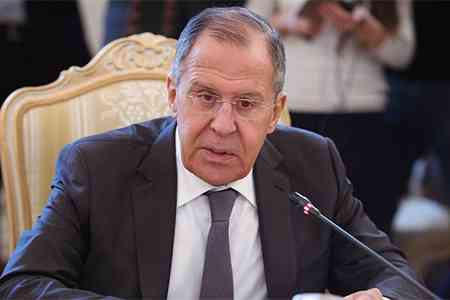 ArmInfo.At the meeting in Moscow, we reached a common understanding on topical issues regarding the international and regional agenda, discussed in detail the entire  range of issues of the Armenian-Azerbaijani normalization in line  with those tripartite documents signed between the leaders of  Armenia, Azerbaijan and Russia since November 2020. Russian Foreign  Minister Sergei Lavrov stated on December 5 in Moscow at a meeting  with his Azerbaijani counterpart Jeyhun Bayramov.

"And these documents, in our common conviction, remain a steady,  solid, reliable basis for the full settlement of all issues,  including the unblocking of regional transport and economic ties, the  delimitation of the border between Azerbaijan and Armenia, and the  achievement of specific agreements on the conclusion of a peace  treaty," he said.

At the same time, the head of the Russian Foreign Ministry recalled  that in all these areas the Russian side is ready to provide  assistance in which they (Yerevan and Baku - ed. note) are  interested.

Lavrov said that the meeting also touched upon the work of the 3+3  consultative regional platform (Russia, Turkey, Iran - on the one  hand, and Georgia, Armenia and Azerbaijan - on the other). According  to him, the next meeting is being prepared within the framework of  this initiative; a specific date and agenda are being agreed upon.

In conclusion, he expressed satisfaction with the talks held in  Moscow, which, according to Lavrov, will certainly contribute to  maintaining peace, stability and security in the South Caucasus.

In turn, the Azerbaijani Foreign Minister welcomed the interest of  Russian business in restoring the territories that came under  Azerbaijani control as a result of the Azerbaijani-Turkish  large-scale military aggression against Artsakh.

"We separately discussed the post-conflict situation in our region,  the normalization of relations between Armenia and Azerbaijan.  Official Baku highly appreciates the role of Russia in the  normalization of Armenian-Azerbaijani relations. From this point of  view, we consider it important to fulfill all agreements in good  faith and within the framework of the tripartite statement of the  leaders of Armenia and Azerbaijan and Russia," Bayramov said,  traditionally accusing Armenia of not fulfilling the agreements  reached, while forgetting about the Armenian prisoners of war held in  Baku for the third year already.

At the same time, he spoke in favor of unblocking regional transport  routes, again accusing Armenia of dragging out the process. Bayramov  also assured that the Azerbaijani side has always supported the  normalization of relations with the Armenian side on the basis of the  norms and principles of international law and respect for the  sovereignty and territorial integrity of states. At the same time, he  kept silent that at the moment Azerbaijan has occupied more than 150  square kilometers of sovereign territory of Armenia.

"We believe that the UN Charter and the Alma-Ata Declaration of 1991  are a good basis for moving forward," he said, adding that based on  this logic, the Azerbaijani side developed and submitted to Armenia 5  basic proposals for the normalization of relations. According to him,  two rounds of negotiations have already passed.

"The third package of comments from the Azerbaijani side has been  submitted to the Armenian side, and we consider it possible to hold a  third round of negotiations between Yerevan and Baku on a draft peace  treaty by the end of this year. Despite the positive dynamics in the  negotiation process, progress is rather limited on all tracks," said  the head of the Foreign Ministry of the Republic of Azerbaijan, in  conclusion, stating with cynicism that "Azerbaijan is ready to  provide the Armenian population in the territory of the former  conflict with all the rights and guarantees enjoyed by the citizens  of the Republic of Azerbaijan."