RA NA Speaker: Armenia has never made statements regarding its  intention to withdraw from CSTO 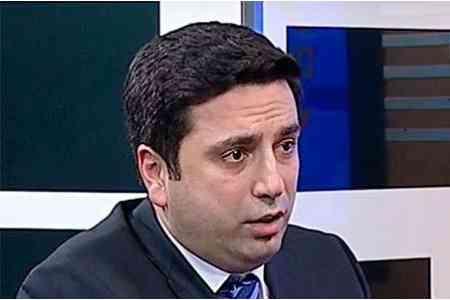 ArmInfo.Armenia has nevermade statements regarding its intention to withdraw from CSTO, but Yerevan is concerned about the organization's attitude towards the  republic, Alen Simonyan, speaker of the Armenian parliament, said on December 5.

"Every day, Azerbaijan violates the ceasefire regime, as a result of  which people die. Some passivity of the CSTO, as well as official  statements by some of our allies, caused significant changes in the  public mood in Armenia," Simonyan said, RIA Novosti quotes.

"We have never made statements about leaving the CSTO, we said that  the CSTO is leaving the region, we are very concerned about this. It  seems that the territory of Armenia does not have equal strategic  importance for the CSTO, while close attention is paid to the Eastern  European region and Central Asia," the speaker said during a joint  meeting of the Council of the Parliamentary Assembly of the  Collective Security Treaty Organization and the fifteenth plenary  meeting of the CSTO PA.  The CSTO PA is a body of inter-parliamentary  cooperation. The members of the CSTO PA are Armenia, Belarus,  Kazakhstan, Kyrgyzstan, Russia and Tajikistan, the lower house of the  National Assembly of the Islamic Republic of Afghanistan, the  Parliamentary Assembly of the Union of Belarus and Russia, the  National Assembly of Serbia have observer status.