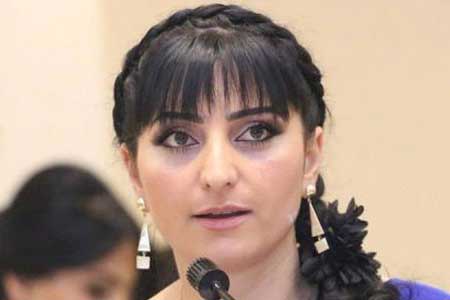 "I draw my international colleagues' attention to Azerbaijan's  behavior which is unlawful and violates such basic human rights as  the right to life, health, freedom and other universal rights.  Closing the only highway to Artsakh, the Azerbaijanis have blocked  the medical supplies and other supplies of medicines to Artsakh,  patients with serious health problems were not able to reach Armenia  from Artsakh for the necessary medical care during all the time.

"I alarm my international colleagues: the blocking by Azerbaijan of  the only infrastructure connecting Artsakh to Armenia is only the  beginning of another crime by Azerbaijan. Azerbaijan is going to  reach humanitarian disaster in Artsakh in the nearest future in order  to carry out its planned programs of a new Genocide against  Armenians, to deprive the people of Artsakh of the right to live a  peaceful life in their homeland, and to de-Armenianize Artsakh.

"While N. Pashinyan's Government, which is strongly committed to  peace agenda with Turkish people, lowering the bar in the Artsakh  issue and laying security guarantees and rights under the Armenian  concept of NK issue regulation, is stubbornly silent."