Russian Ambassador: There can be no sustainable peace without just  settlement of conflict 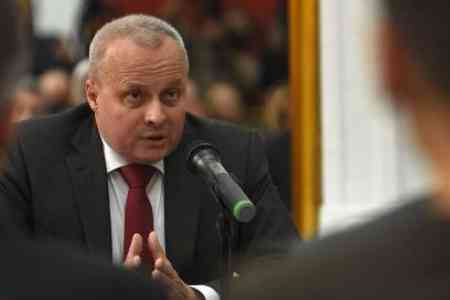 ArmInfo. Russian proposals for concluding a peace treaty between Armenia and Azerbaijan are completely logical and satisfy both sides almost one hundred percent,  something that has been openly declared. Russian Ambassador to  Armenia Sergey Kopyrkin stated.

"Of course, these proposals are not subject to wide discussion, in  the end, they are for these parties. Both the Armenian and  Azerbaijani sides decide what is acceptable for them and what is not,  what compromises to reach based on national interests. The role of  Russia here is to help in every possible way on the one hand, and on  the other hand, this is Russia's unique role as a stabilizing  factor," the Russian Ambassador to Armenia said in an interview with  Kentron TV channel.

According to him, the Russian peacekeeping contingent in  Nagorno-Karabakh, the servicemen on the border and the 102nd Russian  military base, these are all factors that play a key role in  preventing a large- scale escalation and disruption of all elements  of security and normal life in the region, no matter how much one  disagrees with it.

"I think that any open-minded person will recognize this fact. You  will make sure of it when you communicate with the population of  crisis regions. This also applies to our peacekeeping contingent in  Nagorno-Karabakh," Kopirkin said.

The Ambassador called it very important that in the last trilateral  statement of the leaders of Armenia, Russia and Azerbaijan dated  October 31 this year, made in Sochi, the positive role of the Russian  peacekeeping contingent was emphasized. "This is a recognition that  Russia is making a real practical contribution to those processes of  normalization, to maintaining stability and security in the region,"  the diplomat added.

At the same time, he stressed that Russia is determined to continue  advancing the peace process between Armenia and Azerbaijan. Kopyrkin  recalled that Igor Khovaev, special representative of the Russian  Foreign Ministry for the normalization of relations between Armenia  and Azerbaijan, is dealing with this issue. According to the  ambassador, Khovaev is a fairly frequent guest both in Yerevan and  Baku and plays a very important role in developing proposals between  the parties.

"A very important role belongs to our servicemen: the border guards  and the peacekeeping contingent that operates on the ground. But this  work is not noisy, not for the public, not to please someone, but  this is a very responsible, practical work to assist in real  normalization on all spectrums of the agenda," Kopyrkin said, adding  that this is a multifaceted, persistent work between the parties to  achieve a peace agreement.

"The main thing for us here is the solution of all those acute,  long-standing problems by peaceful, political means on a fair basis.  There can be no lasting peace if one of the parties considers the  terms of the settlement to be unfair. This is an important element of  our approach," the diplomat concluded.