Oppositionist: Parliaments of France and Artsakh make statements,  while National Assembly of Armenia refuses to discuss a similar  document 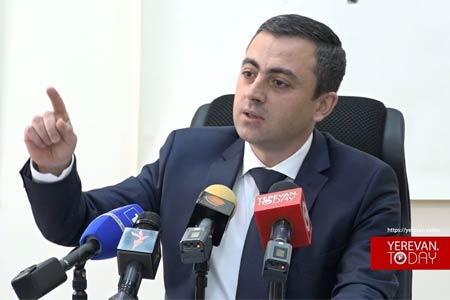 ArmInfo. The ruling "Civil Contract" faction of the National Assembly of Armenia objects to the use of the phrase Republic of Artsakh in the text of the NA  statement.

Ishkhan Saghatelyan, a MP from the "Armenia" opposition faction, told  reporters on December 2.

Earlier, the faction initiated an extraordinary meeting today, at  which it is planned to discuss and adopt the text of the statement of  the National Assembly in response to the statement of the Milli  Mejlis of Azerbaijan.

Saghatelyan noted that the statement of the National Assembly of the  Republic of Armenia is based on three main principles - the right of  the people of Artsakh to self- determination, its status and the  obligations of Armenia. However, as the MP noted, the representatives  of the authoritieswant to make adjustments to the draft document,  proposing to use the term "Armenians of Karabakh" instead of the  phrase "Republic of Artsakh".

They also call for avoiding the use of the principle of the right of  the people of Artsakh to self-determination and the obligations of  Armenia. <Thus, they completely distorted the text of the statement.  It turns out that the National Assembly and the Senate of France, as  well as the Parliament of Artsakh, make statements, while the  National Assembly of Armenia refuses to discuss the submitted  document>, the MP said.

He also noted that the current authorities abstained from protecting  the interests of Armenia and Artsakh, considering the national  interests of Turkey and Azerbaijan.  <There is no other explanation  for this behavior. By the way, I want to emphasize that there is no  political assessment in the statement proposed by the opposition. It  refers exclusively to Artsakh and Armenia. We talk about the  challenges faced by the Armenian people, and they, as always, are  trying to evade the agenda, constantly promoting the issue of the  previous 30 years>, Saghatelyan said.

He recalled that in the previous two times the parliamentary majority  boycotted the meetings, which were convened at the initiative of the  opposition. "It would be illogical to run away from reality for the  third time, so the representatives of the authorities had to  participate in the extraordinary session of the National Assembly  initiated by us," Saghatelyan emphasized.