Armenian FM: Targeted and principled assessments of intl. community  can contribute to establishment of stability in South Caucasus 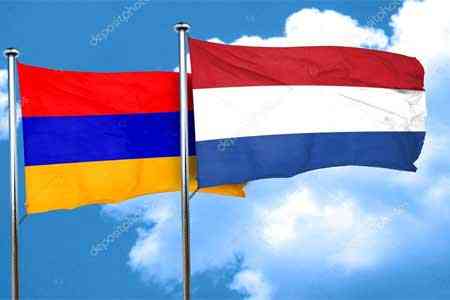 As the press service of the RA MFA reports the interlocutors highly  appreciated the dynamically developing Armenian-Dutch relations and  expressed readiness to undertake consistent steps towards further  expansion of the mutually beneficial cooperation and the  implementation of the agreements reached during Prime Minister Nikol  Pashinyan's visit to the Netherlands.

Ararat Mirzoyan highlighted the importance of close cooperation  established with the Netherlands in terms of promoting the agenda of  democratic reforms in Armenia. The role of parliamentary diplomacy  was underscored in the context of the development of relations  between the two countries.

Touching upon the situation resulting from the Azerbaijani aggression  against the sovereignty of Armenia on September 13-14, Ararat  Mirzoyan emphasized the inadmissibility of Azerbaijan's policy of  using force and the threat of force to achieve its own maximalist  goals. In this context, the Minister of Foreign Affairs of Armenia  stressed that the targeted and principled assessments of the  international community can contribute to the establishment of  stability in the South Caucasus.

Minister Mirzoyan briefed his counterpart on the recent developments  in the normalization process of Armenia-Azerbaijan relations, the  approaches of the Armenian side on the settlement of the  Nagorno-Karabakh conflict.

The sides exchanged views on the activity of the EU Monitoring  Mission in Armenia, commending its positive role in establishing  sustainable peace in the region.