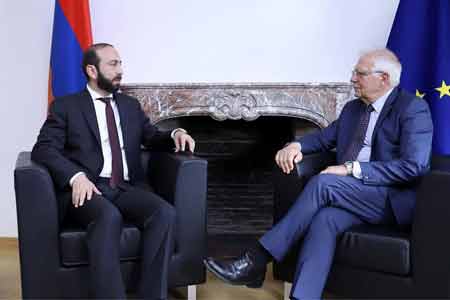 ArmInfo.Within the framework of 29th OSCE Ministerial Council, the Foreign Minister of Armenia Ararat met with Joseph Borrell, the High Representative of  the European Union for Foreign Affairs and Security Policy.

As reported by the RA Foreign Ministry's press service, The  interlocutors commended the development dynamics of the Armenia-EU  partnership and exchanged views on the expansion of the bilateral  agenda.

Minister Mirzoyan emphasized the commitment of the Armenian side to  establish peace in the South Caucasus and highly appreciated the EU's  support in this direction. Foreign Minister of Armenia underlined  that Azerbaijan's non-constructive position and maximalist  aspirations hinder the efforts towards achieving peace and contribute  to increasing the chances of escalation. The need to eliminate the  consequences of Azerbaijani aggressions against the sovereign  territory of Armenia was stressed.

Later, following his meeting with Mirzoyan, Borrell tweeted:   "Discussed with Armenian Foreign Minister Ararat Mirzoyan ways to  advance on peace building and sustainable conflict settlement in the  region. The EU remains committed to closely supporting both Armenia  and Azerbaijan towards the normalization of their relations."