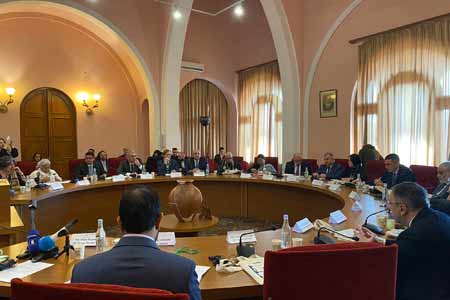 The conference has been organized by Armenia's foreign office to mark  the 30th anniversary of Armenian- Indian diplomatic relations. Mr  Safaryan expressed confidence that new fields for cooperation will be  outlined.

"Our bilateral relations have dynamically been developing for the  last 30 years. Comprehensive development of relations with India is  among Armenia's foreign policy priorities. It is gratifying to see  that India's viable democracy and developing economy is making  essential progress in various fields, which contributes to its  international image," Mr Safaryan said.

Yerevan and Delhi are actively cooperation in the international  arena.

"However, despite the above, I am sure that we have serious  unrealized potential for developing our trade and economic relations,  making use of investment opportunities and intensifying people's  contacts.  Armenia could well take advantage of India's progress in  improving its defense capacity and developing its economy. With the  trade routes rapidly changing and international commercial  opportunities, we need to think of developing our export and import  potential in the southern direction," Mr Safaryan said.

In his turn, Mr Sanjay Verma of India's foreign office stated that  the conference is a good opportunity for developing the bilateral  ties.

India is going to chair the G20 from this December, he said.

Mr Verman reported that about 5,000 Indian students are studying in  Armenia's higher schools.

However, it is not enough, he said, calling on Armenia's government  to facilitate cooperation. Mr Verma pointed out serious potential for  trade and economic cooperation, and Armenia could stimulate Indian  investments in its economy, the official said.

The conference, which has been organized by Armenia's foreign office  in coordination with the Institute pf Oriental Studies, includes four  thematic platforms:

"Armenia and India in the framework of global and regional  developments."