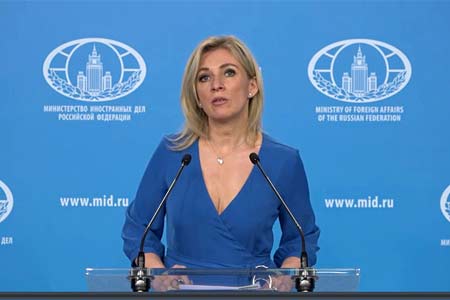 ArmInfo. Moscow attaches importance to close adherence to the trilateral statement by the Russian, Armenian and Azerbaijani leaders, including the agreement  reached at the meeting in Sochi on October 31, Maria Zakharova,  Spokesperson for the Russian foreign office, told a news briefing on  Thursday as she responded to a request to comment on a gross  violation of the aforementioned agreements by Azerbaijan.

"Of course, we attach importance to refraining from provocative  rhetoric, which could escalate the situation in the region. Russia is  maintaining regular contacts with both the sides - both at the  political level, including the heads of state and the foreign  ministers, and on the ground, with the peacekeeping contingent, the  RF Frontier Service to prevent armed incidents," she said.

Moscow will continue its work aimed at normalizing  Armenian-Azerbaijani relations for peace to be established in the  South Caucasus.

As to how the Kremlin plans to find consensus between Baku and  Yerevan on the Armenian premier's statement yesterday, as Russia  proposed postponing the issue of Artsakh's status and not including  it in the peace agreement, which is acceptable to Armenia, whereas  Azerbaijan rejected this proposal, Ms Zakharova said that the  question should be addressed to the Kremlin as their duties are  separate.

The issue of an Armenian-Azerbaijani peace agreement, as well as  others related to rapprochement between the two nations, is a rather  sensitive one. "We do not consider it advisable to comment on the  sides' positions before they reach specific agreements, which has  repeatedly been stated," Ms Zakharova said.

"He is now in Baku to meet with the Azerbaijani side. The sides are  also discussing the peace agreement," Ms Zakharova said.