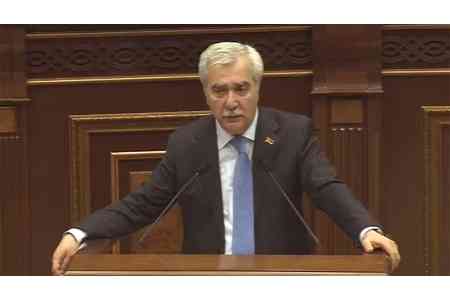 ArmInfo.At the session of the RA National Assembly Standing Committee on Defense and Security on November 24, its chairman Andranik Kocharyan appealed to the  National Security Service with an appeal to be vigilant in relation  to officials who have committed offenses.

He noted that despite the criminal case initiated against the former  Minister of Defense of Armenia Vigen Sargsyan, the latter managed to  make a deal with the owners of the Vivaro company to sell his  property. "It seems that Vigen Sargsyan made a deal with a company  that very quickly transferred the money for the deal outside the  country. This means only one thing: apart from the issue of property,  there were also other stories that should be studied," the MP noted.

He appealed to the National Security Service with a call to be  vigilant to such phenomena, which already tend to recur. <It really  worries me how this could happen. Recently it became known that  another person, in the framework of another similar criminal case,  managed to leave Armenia>, Kocharyan said, adding that the country's  authorities are making efforts to restore damage caused by former  officials.

The MP noted that in most cases the NSS very effectively detects and  prevents such violations, and called on the leadership of the body to  discuss the issue raised at a meeting of the board of the NSS.

It should be noted that, according to the Armenian media, law  enforcement agencies of Armenia continue to help former high-ranking  officials in transactions for the expropriation of their assets in  favor of third parties. In particular, as noted by civil.net, despite  the criminal case, the owners of Vivaro bought Vigen Sargsyan's  luxurious house for $2.5 million. The former Minister of Defense of  the Republic of Armenia also sold two apartments on Northern Avenue,  in connection with which a criminal case was initiated, but no  arrests were made on this property for three years. The arrest was  imposed only on November 22, when the deal was actually completed.  The buyer is the family of owners  of <Vivaro>. The parties signed a  sale and purchase agreement within one day, after which the money was  also transferred to the family of Vigen Sargsyan within one day. The  notary certified the transaction, and its participants turned to the  Cadastre for registration. Only after that the Investigative  Committee decided to seize the property.