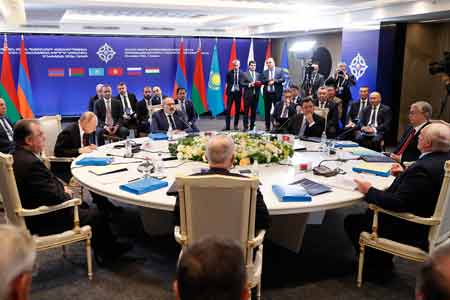 According to the CSTO press service, in the document they express  their disagreement with the unprecedented decision of the OSCE  Chairmanship-in-Office (Poland), which made it impossible for the  delegation of the Minister of Foreign Affairs of the Russian  Federation to participate in the 29th meeting of the OSCE Council of  Foreign Ministers.

The Foreign Ministers state that by infringing on the rights of the  Russian delegation, the Polish Chairmanship-in-Office has not  fulfilled its obligations to the OSCE, which is currently the most  representative pan-European organization for security and  cooperation.

"Such steps are detrimental to the activities of the OSCE. The  Foreign Ministers call on the OSCE Chairmanship-in-Office to ensure  equal and inclusive representation of all OSCE participating States  without exception, as well as future chairmanships in OSCE  institutions and bodies to take a constructive approach to their  role, to ensure compliance with their mandates and participation  practices all members of the Organization to achieve the goals of  dialogue and cooperation for the benefit of all OSCE participating  States," the CSTO Council of Ministers said in a joint statement.

Meanwhile, the Defense Ministers Council, Committee of Secretaries of  Security Council adopted a decision to give the status of the base  organization of the CSTO member states for demining to the  International Mine Action Center of the Armed Forces of the Russian  Federation for the training of relevant specialists.

The next regular meetings of the Ministerial Council, Defense  Ministers Council, Committee of Secretaries of Security Council will  be held in the second quarter of 2023 in Minsk.

It should be reminded that the Polish OSCE Chairmanship did not allow  Russian Foreign Minister Sergei Lavrov to participate in the annual  meeting of the Organization's Council of Ministers of Foreign  Affairs, which will be held on December 1-2 in Lodz. The Russian  Foreign Ministry criticized this step of the Polish side. "The  decision of Poland, which is the OSCE Chairman-in-Office, to refuse  the Minister of Foreign Affairs of the Russian Federation S.V. Lavrov  to participate in the meeting of the OSCE Council of Foreign  Ministers (CMFA) in Lodz on December 1-2 this year is unprecedented  and provocative. It is incompatible with the status of chairman of an  Organization in which 57 countries participate as sovereign and  independent states in conditions of complete equality. The rules of  procedure of the OSCE and the decisions of its decision-making  bodies, in particular the decision of the OSCE Ministerial Council in  Porto (2002) on the principles of the work of the  Chairmanship-in-Office, have been violated," the Russian Foreign  Ministry said.