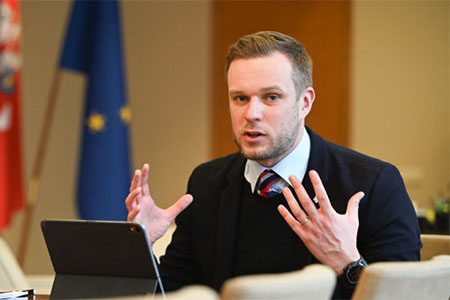 ArmInfo.Minister of Foreign Affairs, Member of Parliament of Lithuania, Gabrielius  Landsbergis, in his microblog on Twitter, touched upon the protests  held in Yerevan against Armenia's membership in the CSTO.

"Armenians protesting Putin's visit to Yerevan remind me of  Lithuanians protesting Gorbachev's visit to Vilnius in 1990. That day  thousands of us showed that flags, banners and songs can repel  dictators who try to take our freedom," Landsbergis wrote.

It should be noted that today a small group of people numbering no  more than 40 people tried to prevent the CSTO summit from being held  in Yerevan. They moved towards Svoboda Square, demanding to leave the  CSTO, while shouting "Glory to Ukraine". As a result of the  intervention of police officers, four of them, including the leader  of the European Party Tigran Khzmalyan, were detained, where they  stayed for about three hours, after which they were released.