Lukashenko: Let`s do everything possible so that people don`t die 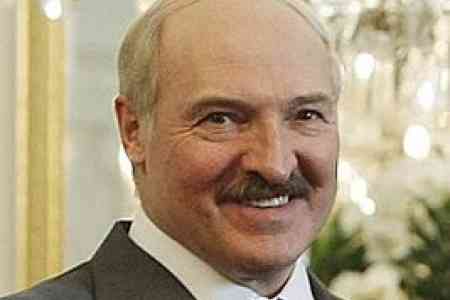 ArmInfo. President of Belarus Aleksandr Lukashenko considers it necessary to do everything in order to resolve the conflict between Armenia and Azerbaijan.  Belarus President Aleksandr Lukashenko made the statement at a  session of the CSTO Collective Security Council in Yerevan, Armenia  on 23 November, BelTA has learned.

According to the source, speaking about existing challenges and  threats, Aleksandr Lukashenko stated that a complicated situation is  evolving in the Collective Security Treaty Organization, too. He  said: "We've repeatedly said that attempts are being made to stir up  trouble in societies inside our countries right along the perimeter  of the Russian Federation. Ukraine flared up first. An attempt to  destroy Belarus was made in 2020. Belarusians have gone through that.  Kazakhstan had to go through that in January 2022 (it is good that  Kazakhstan's leadership managed to deal with this conflict). A  conflict between Armenia and Azerbaijan. I will repeat what I said at  an extraordinary session of the Collective Security Council on 28  October: we would like the conflict between the two neighboring  countries that are friendly to us to be resolved in a peaceful  manner." Aleksandr Lukashenko went on saying: "I think I will say  what's on everyone's mind.  We are not staying aside. One shouldn't  say that the CSTO failed to prevent Azerbaijan's aggression like  [Armenia Prime Minister] Nikol Vovayevich [Pashinyan] said. It is not  our job to stop someone from doing something. But we have to react to  facts. So we are ready to react." He remarked that Russia is now  acting as a mediator in this matter and both Armenia and Azerbaijan  have agreed with it. "Let's move in this direction. Let's come to  terms, let's do everything so that people don't die over there. The  Armenian society and the Azerbaijani society would accept it with  pleasure," the president is convinced.  "Yes, Nikol Vovayevich, there  are nuances. And possibly serious ones at that. But we can now  radically resolve this conflict, which may flare up again. Provided  Armenia's leadership desires it. And naturally Azerbaijan's. By the  way, I am going to talk about it. It is one of the priorities of  Belarus' presidency in the CSTO. We shouldn't turn a blind eye to it.  We may or may not resolve this problem but this problem should be in  the center of attention of the Collective Security Treaty  Organization," the head of state stressed.  Aleksandr Lukashenko went  on saying: "But one has to understand that it is a conflict between  two neighboring states, which are close and friendly to us. It is the  reason. Not because we want to please one side to the detriment of  the other one.  Armenians are not strangers for us and we want to  support them. But we need motion primarily from Armenia in this  regard." "But in view of that I fail to understand why the European  Union and the OSCE have to be involved in this conflict in addition  to Russia, which acts as a mediator. Can someone explain it to me?"  the head of state wondered. "Are they here in order to continue  driving a wedge into relations between us, between allies? It has  always been like that throughout history. We know where this kind of  'mediation' can lead.  This conflict will be simply frozen for many  years once again at least. They don't need stability and peace in our  region but the devastation that they control." The president pointed  out that the conflict situation at the Kyrgyzstan-Tajikistan border  is a similar one. "We are being played off against one another," he  stressed.  Aleksandr Lukashenko believes that allies in the  Collective Security Treaty Organization have to help these countries  resolve the conflict situation. "We don't need these brawls. Because  logs and charred sticks will be added to this bonfire all the time.  We don't need that," he said.