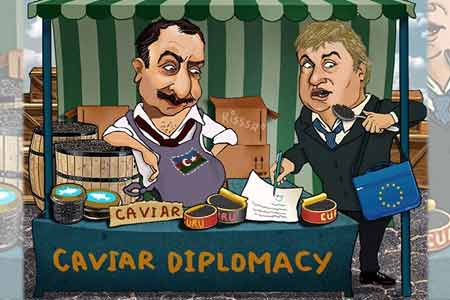 ArmInfo. The BBC has been accused of 'whitewashing' the Azerbaijani dictatorship after broadcasting a film made with the support of the country's controversial ruling family - and sponsored by UK oil and gas giant BP, www.opendemocracy.net  reports.

Audiences tuning into BBC World News in August were promised that  they would discover "how Azerbaijan's oil wealth enabled the capital  Baku to flourish" and "gain the reputation of being the 'Paris of the  East'" in the BP-sponsored 'Wonders of Azerbaijan' film.

BP spent њ300,000 on the film, which was made by UK production  company SandStone Global with support from a foundation and a media  centre run by members of Azerbaijan's ruling Aliyev family.   Broadcaster and historian Bettany Hughes, who co-founded SandStone,  presented the film.

Emin Huseynov, an Azerbaijani journalist who fled political  persecution in Azerbaijan in 2015, accused the BBC of "whitewashing a  dictatorship" over the film.

Husyenov, who was the subject of an award-winning 2006 BBC  documentary which followed pro- democracy youth activists in  Azerbaijan, told openDemocracy that the BBC had undergone "a shameful  transformation and given the floor to one of the bloodiest and most  corrupt regimes in the world."

He also accused the BBC of being "passive" in its coverage of the  human rights situation in Azerbaijan and questioned the lack of  scrutiny over BP's ties to the Aliyev regime.

The BBC told openDemocracy that the 'Wonders of Azerbaijan' film "is  not a current affairs programme".

"The wider geopolitical story of the region has been reported on  extensively by BBC News services," a spokesperson said.

Chris Garrard, from the arts campaign group Culture Unstained, told  openDemocracy that media sponsorship arrangements such as BP's  "legitimise" fossil fuel companies as they continue to invest in new  oil and gas infrastructure, rather than trying to meet net-zero  goals.

The film also implicitly promoted Azerbaijan's claims to Shusha, a  city in the disputed territory of Nagorno-Karabakh that Azerbaijan  seized from Armenian forces in the Second Karabakh War in 2020.   Azerbaijan now wants to turn the region into a 'green energy zone' -  with BP's help.

Under its so-called 'contract of the century', BP is the largest  foreign corporate investor in resource-rich Azerbaijan.

It has long faced criticism from human rights and climate activists  for its ties to the ruling Aliyev regime, which has been accused of  "electoral fraud", the silencing of dissenting voices and benefiting  disproportionately from Azerbaijan's oil and gas wealth.

"BP needs to keep the [Azerbaijani] government onside and this [film]  is a low-cost way of doing it," said campaigner James Marriott,  co-author of Crude Britannia: How Oil Shaped a Nation.

BP told openDemocracy it aims to work for the "effective and  responsible" development of the Caspian Sea's energy resources for  the benefit of Azerbaijan and the company.

It added that it has a net zero ambition and is working to  decarbonise operations and develop renewable energy in Azerbaijan.

"We do not support individuals or political groups in any country," a  BP spokesperson told openDemocracy.

A BBC spokesperson said: "Hosting advertising and sponsorship outside  of the UK, which is clearly labelled as such and is completely  separate to our editorial output, allows us to invest in the BBC's  world- class journalism, which provides independent and impartial  news across all topics, including climate change, the energy crisis  and geopolitics."

BBC World News aired the two-part programme to its viewers outside  the UK over a week in August - the same week that British audiences  saw the BBC broadcast extensive coverage of the energy crisis and  soaring household fuel bills.

Ads aimed at the "curious, eco-conscious traveller" were shown  alongside the BP-sponsored film, as part of a brand deal between BBC  Global News (one of the BBC's commercial subsidiaries) and  Azerbaijan's official tourist board.

The BBC's 'Wonders of Azerbaijan' film is part of a wider editorial  series, also presented by Bettany Hughes, which explores areas of  natural, artistic and cultural interest around the world.

The BBC licensed the content for the two-part programme from Hughes's  production company, SandStone Global. The BBC edited the material,  but the copyright remains with SandStone. The production itself was  funded by BP, whose sponsorship was made clear on screen when the  programme aired.

Each of the two episodes was broadcast globally five times in late  August, flanked by travel ads for Azerbaijan. It was not broadcast in  the UK.

A representative of SandStone Global told openDemocracy that it was  "standard practice" for production companies to get support from  "local organisations" for on-location services.

SandStone's representative said: "[The organisations' involvement]  does not amount to editorial influence, as all decisions relating to  our productions are made by the SandStone Global team." Arzu Aliyeva  was not personally involved in the production process, they added.

The BBC spokesperson said: "Whilst the original programme was not  made by the BBC, the BBC alone has full editorial control over  everything broadcast on its channel, in line with its robust  editorial guidelines."

BP supported the programme as a "contribution to Azerbaijan's global  promotion" in partnership with the Heydar Aliyev Foundation, named  after the former president, who led the country both before and after  it gained independence from the Soviet Union in 1991. Heydar Aliyev  was succeeded in 2003, after ten years of rule, by his son, the  current autocratic president Ilham Aliyev.

The foundation is chaired by Ilham's wife Mehriban Aliyeva, who is  also the country's vice president.

The Heydar Aliyev Foundation is tasked with promoting Azerbaijan's  image abroad, including by advancing the government position over  Nagorno-Karabakh. But government critics say this work extends to  diverting attention from the regime's relentless crackdown on dissent  and its systemic corruption.

"The foundation was set up by the ruling family to whitewash  Azerbaijan's image," Arzu Geybullayeva, an Azerbaijani journalist  living in exile, told openDemocracy. She added: "It can by no means  be described as independent of the state."

The Heydar Aliyev Foundation did not respond to requests for comment.

Speaking at a launch event for the film in Baku in September,  presenter Bettany Hughes said: "I understand history not through  politics. I don't get involved in politics at all.

"But I do go to places which have been extraordinary in culture. So  it was exceptional for me to get access to places which when I came  last time I couldn't go to because there was too much conflict  there."

Hughes was speaking about Nagorno-Karabakh, which is internationally  recognised as Azerbaijani territory - but had been under ethnic  Armenian control since the early 1990s.

That was until 2020, when Azerbaijan started a 44-day war to take  control of part of the disputed territory - as Ilham Aliyev himself  recently admitted. Thousands were killed in the fighting as Armenian  forces attempted to protect it.

Indeed, the BBC series featured a segment where Bettany Hughes  travelled to the city of Shusha, in Nagorno-Karabakh. Azerbaijan  seized the city in November 2020 as part of its brutal military  offensive.  Prior to that, Shusha - known as Shushi to Armenians -  had been in the hands of ethnic Armenians since the first  Nagorno-Karabakh war three decades earlier.

Azerbaijan has now declared Shusha a "cultural capital", and major  efforts are under way to restore Azerbaijani culture in the city. The  Heydar Aliyev Foundation is leading restoration works in Shusha.   Some of these works featured in the BBC programme, including a  sequence shot inside a reconstructed Soviet-era mausoleum to the  18th-century Azerbaijani poet and statesman Vagif. The monument fell  to ruin when the city was under Armenian control.

Speaking in Shusha in June 2022, BP's regional president Gary Jones  said Nagorno-Karabakh had the country's "best solar and geothermal  resources" - making it a "perfect opportunity for a fully net zero  system". BP is planning a solar power plant in the city of Jabrayil,  which Azerbaijan regained control over during the 2020 war.

'Wonders of Azerbaijan', which did not address Armenia's connections  to Shusha or Nagorno-Karabakh's bitterly contested history, was  broadcast in the last week of August.

A fortnight later, Azerbaijani forces made further incursions into  Armenian territory - the worst escalation in the Armenia-Azerbaijan  conflict since the 2020 war.

BP's Jones took to the stage at the Baku premiere of the film in late  September to praise the "unwavering support of the [Azerbaijani]  government" for his company and its co-venturers' operations in the  country.

Jones also spoke of the "joint effort" that went into creating the  documentary. He thanked the Heydar Aliyev Foundation for its support  and paid personal homage to the president's daughter, Arzu Aliyeva,  and to the Baku Media Centre she heads, "for their outstanding  technical support" on the production.

This isn't the first time BP has collaborated with the Heydar Aliyev  Foundation, or that the foundation has cropped up on the BBC.

Last year, BBC StoryWorks, the in-house content studio for the  commercial BBC Global News, ran a separate tourism-focused campaign  for Azerbaijan to mark the 30th anniversary of the country's  independence from the Soviet Union.

The campaign included a paid-for advertorial that invited readers to  "discover more" about Azerbaijan by following a link to an external  website run by the Heydar Aliyev Foundation. The 'Azerbaijan' portal  claims (among other things) that Azerbaijan's current president Ilham  Aliyev "has always focused on ensuring a fuller provision of human  rights and freedoms in the country". It also contains information  about the so-called "Armenian problem".

Azerbaijani officials have a long record of using dehumanising  language and imagery about Armenians, including opening a "war park"  last year containing weapons, armour and vehicles seized from  Armenian forces and wax figures of Armenians - as the BBC reported in  the UK.

The link was removed after openDemocracy contacted the BBC for  comment.

BP, meanwhile, has signed a cooperation agreement with the Heydar  Aliyev Foundation to jointly implement some of its social investment  projects.

Previous joint projects have included sponsored films, such as 'The  Last Session', a 2018 documentary commemorating the birth of the  Azerbaijan Democratic Republic - the short-lived independent state  that was ended by Soviet invasion in 1920. BP spent $320,000 on the  project, which was organised by the Baku Media Centre. Arzu Aliyeva  was credited as the film's executive producer.

In its statement to openDemocracy, BP said that its social investment  policy in Azerbaijan - and elsewhere in the region - was "in line  with our group sustainability framework."

The company said that it has supported over 100 communities in  Azerbaijan through educational and cultural initiatives, including  projects aimed at building opportunities for advancing the energy  transition.