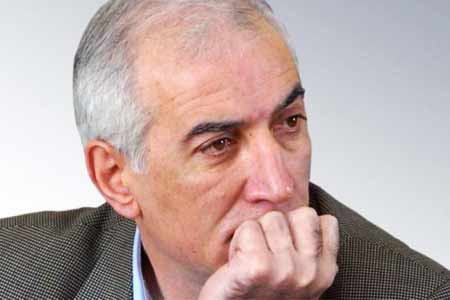 ArmInfo. "Today, in our region, and, I dare say, in the entire world, the world order that  existed prior to 2020 is changing, and if we look at things from this  point of view, then local conflicts are partial manifestations of  that change."Armenian President Vahagn Khachaturyan stated this in an  interview with SpecialEurasia, referring to the future of the  Republic in a rapidly changing world and against the backdrop of  regional challenges.

The President of Armenia emphasized that the 44-day war in 2020 was a  tough ordeal for our people, and generally, it is hard to give a full  assessment of the devastating consequences of wars, for both warring  sides

At the same time, Khachaturian added, "Undoubtedly, amid the  tenseness and changes in the current international reality, each  state needs to make a choice, but I believe these choices are more  about values. In light of this, Armenia has made its unequivocal  choice, which is to follow the principles of democracy unswervingly  and establish democratic institutions.  We are a country with little  opportunities, I mean Armenia isn't rich in minerals, energy sources,  oil and gas, and under such circumstances, democracy, culture,  science become our number one resource to introduce ourselves to the  world, have our spot under the sun and our unique traits. And for all  this, we need peace."

According to him, "there are no alternatives regarding the latter for  Armenia, as peace is the crucial precondition for the accomplishment,  development, and civilisational rise of the citizens individually,  and the state. Briefly put, Armenia has unequivocally chosen the path  of peaceful, democratic, and people-centred development."

Answering the question about Armenia's foreign relations, does he  believe that the settlement of relations with Turkey will be  possible, even though Ankara has never recognized the Armenian  Genocide? How might react the Armenian population about this issue?  He said, in part:

"The establishment of neighbourly relations with all the contiguous  countries, including Turkey, has never been a moot point. We have  always been in favour of establishing relations with Turkey and  opening the boarders with no preconditions.

"It should be emphasised that the wording "no preconditions" is not a  diplomatic evasion and also refers to the issue of the recognition of  Genocide. Unfortunately, I should highlight that throughout decades,  Turkey has been the first to put forth preconditions for opening the  borders and normalising relations, in some sense serving the  Azerbaijani agenda in the process of the settlement of the Karabakh  problem.

In the meantime, I find it important to note that in early 1990s and  in 2008-2009, Armenia and Turkey had the opportunity to change  radically and move toward normalisation. Those opportunities weren't  used to the fullest, but today I find it more than important to look  into the future instead of talking over past drawbacks or lost  chances.

Nowadays, the special representatives of Armenia and Turkey meet  periodically. Positive dynamics can also be seen in the fields of  information and propaganda, and I hope that we can establish  civilised, well-ordered and predictable neighbourly relations. I  profoundly believe that the solution of even the most complex issues  is in development and democracy which can't exist with preconditions  and exceptions. From this viewpoint, Armenia finds the establishment  of civilised relations with Turkey, and all the neighbours to be an  opportunity to reach democracy and development, and to solve complex  issues, as I've already said."

When asked if he sees any changes after September 2022, given the  fact that in the past, the West has often applied the double standard  policy about Armenia and Nagorno-Karabakh, Khachaturian said that he  would like not to provide unequivocal and one-sided evaluations of  the role of the West in Karabakh conflict.  "Established in 1992 the  OSCE Minsk Group has carried out valuable work aimed at the  settlement of the conflict all these years, coming up with various  offers. It's another thing that in 2020, Azerbaijan made an attempt  to achieve the favourable result by using force.  What comes to the  position of the West, and, I can say, the progressive mankind after  September 2022, everything is more than clear here. On September  13th, 2022, Azerbaijan invaded and occupied the sovereign territory  of Armenia. This matter was discussed by the United Nations Security  Council and many countries condemned Azerbaijani aggression, and  finally, the OSCE sent a fact-finding mission to Armenia. I think  these are indicators that lucidly demonstrate the position of the  West," the President of Armenia said.