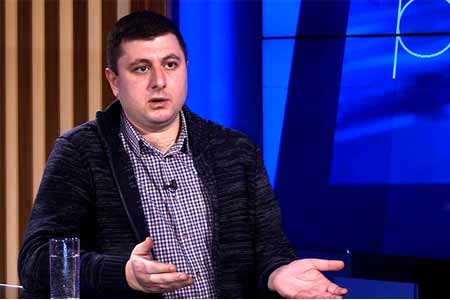 ArmInfo.he persecution by the authorities against Armen Ashotyan, the vice-chairman of the previously ruling Republican Party in Armenia,  is nothing new a  pursues political goals. MP from the "I have the honor" opposition  faction Tigran Abrahamyan stated this on November 17 at a briefing.

He noted that the criminal case initiated against Ashotyan is illegal  and completely fabricated. The purpose of these persecutions is  clear, Armen Ashotyan is one of the active participants in the  protest movement. As the MP noted, "recently, developments in  relation to the RPA vice-chairman have received a brazen and  provocative continuation," Abrahamyan said.

Speaking about the results of the plenary session of the National  Assembly of the Republic of Armenia, he pointed out two issues  related to the armed forces of the country - certification of  servicemen and the adoption of the "Defender of the Fatherland"  program. The MP  noted that both projects carry numerous risks  associated with the procedure and principles of certification.  According to Abrahamyan, any stoppage of this process, could lead to  much more serious consequences in the armed forces than what we have  today. He added that even with the introduction of the most equitable  mechanisms, the system of bonus payments should be applied in cases  where the base salary should correspond to the amount of time spent  by servicemen during combat duty.  "If the base salary of patrol  police officers starts from 270,000 drams, and the salary of a  servicemen- contractors starts from 120,000 drams, then how can the  basic salary of a contract soldier participating in combat operations  be calculated so low? It is impossible to solve the problems of this  soldier with a system of bonuses alone, it is necessary to  significantly increase his base salary," the MP emphasized.

Commenting on the statement of the RA Prime Minister Nikol Pashinyan  on the readiness of the Armenian side to sign a framework peace  agreement with Azerbaijan, Abrahamyan noted that, first of all, in  order to sign such a document, it is necessary to correctly assess  the current situation, which is incompatible with the one that was  7-10 years ago. From a tactical point of view, one can immediately go  for the signing of an agreement, but where is the guarantee that  hostilities will not resume a few days after that. The Madrid  principles also provided for the signing of a comprehensive agreement  first, and then to detail the agreement on the issue of Artsakh.  <Here it is very important to know on what principles this process is  going. If, for example, the right to self-determination of Artsakh is  not fixed, then this whole process will not have any significance>,  the MP said, pointing to the possibility of discussing such tactics,  but while clarifying the principles of regulating relations between  Armenia and Azerbaijan. According to the current situation, the most  important issue - the right of the people of Artsakh to  self-determination is not discussed anywhere.