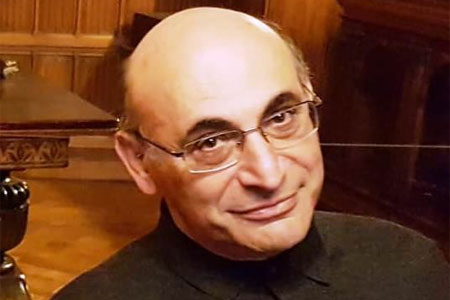 ArmInfo. Well-known Azerbaijani public figure and political scientist Arif Yunusov, who is in forced emigration, explained the reasons of the refusal of vice-president of the  Republic of Azerbaijan, wife of the country's president, Mehriban  Aliyeva, to be an UNESCO Goodwill Ambassador.

On his Facebook page, the political scientist explained the real  reasons for this step by Aliyeva.  <Yesterday, the wife of the  President, Mehriban Aliyeva, in a letter to the Director General of  UNESCO, announced that she was ending her activities as a UNESCO  Goodwill Ambassador. And as a reason, she pointed to the ambivalent  position of this organization in the Karabakh conflict. But this is  the official reason, and first of all for the citizens of their  country.  Meanwhile, Mehriban Aliyeva's refusal is the result of an  ongoing corruption scandal. In 2009, the representative of Bulgaria,  Irina Bokova, was elected Director General of UNESCO. And very soon,  but especially closely since 2012, she established close ties with  the ruling family of Azerbaijan and, first of all, with Mehriban  Aliyeva, of course, not disinterestedly. In 2016, I. Bokova put  forward her candidacy for the post of UN Secretary General. But at  that time, the Organized Crime and Corruption Reporting Organization  (OCCRP) began to reveal the facts of Aliyev's bribery of European  politicians, which soon became known as the "Laundromat" or  "Azerbaijani laundry" and led to a major scandal in PACE. At the same  time, information appeared about the facts of bribery by the Aliyevs  of UNESCO Director General I.  Bokova.  It became known that every  time UNESCO organized something (conferences, exhibitions, etc.) for  the PR of Mehriban Aliyeva, after a few days, money (from 100,000 to  225,000 thousand euros) was transferred to the accounts of the spouse  of UNESCO Secretary General Kalin Mitrov from Baku .  However, the  decisive factor was the news that Bokova, who earned 780 thousand  dollars during her tenure as UNESCO Director General, turns out to  own 2 apartments in New York worth 2.4 million dollars in cash! And  she acquired these apartments largely thanks to the Aliyevs. A big  scandal broke out, Bokova withdrew her candidacy for the post of UN  Secretary General. And in 2017, she ceased to be the Director General  of UNESCO.  Then came the turn of Mehriban Aliyeva, because since  2015 there have been numerous demands to the leadership of UNESCO to  take away the honorary position of Goodwill Ambassador from M.  Aliyeva. But UNESCO did not want a scandal, fearing that all this  would deal a blow to the already heavily tarnished reputation of this  organization. The process was delayed, then the epidemic began. But  now UNESCO has decided to return to this issue and solve the issue of  Mehriban Aliyeva's resignation calmly and without scandals. And  Mehriban Aliyeva was offered to give up the title of UNESCO Goodwill  Ambassador herself, because otherwise many things would come to  light. This is what is actually hidden behind this letter by Mehriban  Aliyeva>