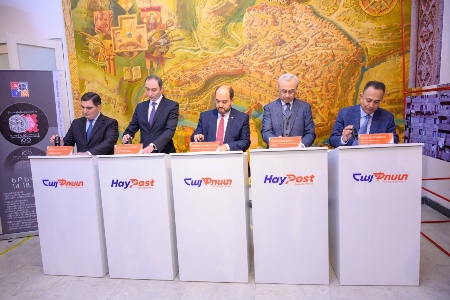 ArmInfo.National Institute-Museum of Architecture after Alexander Tamanian hosted an opening ceremony of an exhibition dedicated to the 100th anniversary  of the Philanum (Union of Philatelists and Numismatists). The  exhibition has been organized with the sponsorship of the Ministry of  Hi-Tech Industry. ACBA Bank is the major partner.

Twenty-five philatelists are displaying their collections. The  Central Bank of Armenia (CBA) has presented coins dating back to the  period of BC.

One postage stamp to the theme "100th Anniversary of "Philanum"  (Union of Philatelists and Numismatists)" has been put into  circulation by Haypost within the framework of the Philatelic  Exhibition organized by the Philatelists' Armenian Association.

The postage stamp was cancelled by the Chief of Staff to the Prime  Minister Arayik Harutyunyan, the Minister of High-Technological  Industry of the Republic of Armenia Robert Khachatryan, the Acting  Chief Executive Officer of "HayPost" CJSC Arayik Abrahamyan, the  President of the Philatelists' Armenian Association Hovik Musayelyan,  Chief Executive Officer of "ACBA BANK" OJSC Hakob Andreasyan.

"HayPost" CJSC has issued a donation coupon for 120 AMD attached to  the postage stamp with the nominal value of 380 AMD. "HayPost" CJSC  will transfer 120 AMD donation value to the Philatelists' Armenian  Association.

The postage stamp depicts a magnifying glass, the logo of the  Philatelists' Armenian Association, as well as the inscriptions  "100TH ANNIVERSARY", "PHILANUM" and "INTERNATIONAL PHILATELIC  EXHIBITION" in Armenian and English.

The stamp, which has been issued in 15,000 copied, has been designed  by David Dovlatyan and printed by Cartor (France).

The exhibition will be open until November 18.