U.S. Department of State comments on results of Armenian and  Azerbaijani FMs` meeting in Washington 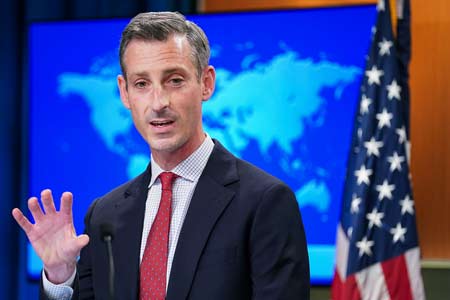 ArmInfo.The U.S. Department of State has commented on the results of the Armenian and Azerbaijani FMs' meeting in Washington.

In response to a question about the "shortness of the statement" on  the results of the meeting, Ned Price, Spokesperson for the U.S.  Department of State, said:

"In the meeting, the foreign ministers agreed to expediate their  negotiations and to organize another meeting in the coming weeks.  They expressed their appreciation to Secretary Blinken, to the U.S.  side for organizing the discussions yesterday. I should note that  Secretary Blinken was involved in the discussions yesterday, but  there were opportunities throughout the course of the day for the two  sides to meet and to attempt to bridge their differences, in some  cases without the United States as an active participant. We remain  committed to promoting a peaceful future for the South Caucasus  region. We believe that continued direct dialogue is key to resolving  issues and to reaching a lasting peace.

"I think going back to your original question, our role in this has  been one of facilitator. We provided, over the course of the day  yesterday, a space - Blair House, in this case - for the two  countries to come together, just as we did in New York a few weeks  ago in late September. But this is not an agreement that the United  States is attempting to or seeking to - or even can - impose on the  two sides. What we are doing is trying to create a space and an  opportunity for the two sides to come together, to identify their  differences - of which there are many - and to attempt to bridge  them.

"And I think there was - yesterday was positive in that the two sides  met, they surfaced many of their areas of disagreement. At the end of  the day, they were able to agree on a joint statement. They were able  to agree to continue meeting and engaging in direct dialogue and  diplomacy in the weeks that follow. That, to us, is quite important.

"We are doing everything we can to help enable the diplomacy that  they themselves will need to undertake - and this is not unlike our  approach to a number of challenges around the world, where we've  demonstrated the viability and the effectiveness of this model. The  historic agreement that was reached between Israel and Lebanon just a  couple of weeks ago - the United States played the role of  facilitator, played the role of mediator, but of course we weren't  dictating the terms.

"But it is incumbent on the United States to use the leverage and the  authority, the good offices that we have, the expertise and  experience that we have in this building and throughout this  government to try and help these processes along."

As to the "the real steps," mentioned by the U.S. Secretary of State,  Mr Blinken said:

"Well, the fact that the two parties have continued to engage, that  itself is a real step. That is actually a step that we hope in the  coming weeks will continue to allow the parties to build on the  momentum that they have been able to sustain since the outbreak of  hostilities. There have, of course, been setbacks. But we believe  that if they continue down the path of dialogue and diplomacy,  they'll be able to build on that momentum, they'll be able to build  confidence between them, trust between them, and we will do  everything we can to support those processes so that they're able to  reach that comprehensive and lasting peace."

As to whether the sides are in fact ready to sign the peace contract  by the end of the year, Mr Price said.

"We will leave that to the parties. This is a decision that they are  going to have to make. I think as you read from their joint  statement, the ministers used the opportunity yesterday to share  views on elements of a possible peace treaty, and they acknowledge  that there are a range of issues that needed to be addressed.  But  they agreed to expedite their negotiations and organize another  meeting in the coming weeks. We will do everything we can to see to  it that they are able to make progress towards that comprehensive and  lasting peace as quickly as possible, ultimately leading to a  comprehensive and lasting peace."