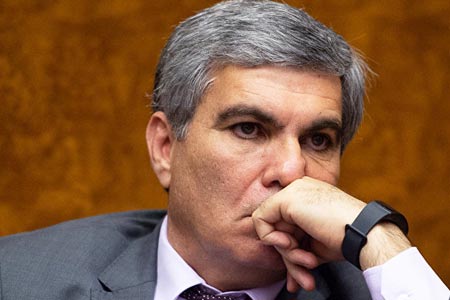 ArmInfo. It is always more productive to negotiate with Azerbaijan than to conduct military operations with it, especially when negotiations are conducted on the  initiative of Russian President Vladimir Putin.

This was stated by the leader of the "Republic" party Aram Sargsyan, commenting on the results of the trilateral meeting in Sochi and the trilateral  statement by the leaders of Armenia, Russia and Azerbaijan - Nikol  Pashinyan, Vladimir Putin and Ilham Aliyev.

As the politician noted, whether the Armenian side wants it or not,  but there are Russian peacekeeping forces in Artsakh, in any case,  when delimiting and demarcating borders, one will have to deal with  Russia.  In this context, Aram Sargsyan is loyal to the statement  signed after the meeting. However, he drew attention to the fact that  everything that the head of the Russian state spoke about at the  Valdai Club two days before the Sochi summit was not reflected in the  statement. Even before the summit in Sochi, RA Prime Minister Nikol  Pashinyan noted that he fully agreed to leave the status of Artsakh  for the future with the extension of the stay of Russian peacekeepers  in Karabakh. <This does not mean that the prime minister's opinion  coincides with my opinion, I'm just stating a fact. Moreover, the  Russian Federation was not able to undertake this position and fix it  in the document. But in any case, I consider the existence of such a  document to be a positive phenomenon, it would be much worse if the  Armenian side returned from Sochi with a zero result>, said the  leader of the Republic party.

In general, as he noted, the statement does not create opportunities  for the resumption of the war. It contains three points that are  acceptable to the Armenian side. First of all, we are talking about  the continuation of the Prague process, the provisions of which were  reflected in the Sochi statement. The second important point of the  document concerns the need for the presence of Russian peacekeepers  in Artsakh, since it is very important for the residents of Karabakh  to know whether Russian peacekeepers will remain in three years or  not, especially when the document is signed by the President of  Azerbaijan.  And the third important component of the document  concerns the unblocking of regional communications.  As the  politician noted, the signed document is evidence that large-scale  hostilities should not be expected in the near future.

Speaking about the paragraph of the document, which contains a  provision on the recognition of the territorial integrity of each  other in accordance with the Almaty Declaration and the UN Charter,  the the politician noted that by introducing this paragraph,  Azerbaijan initially also meant Eastern Zangezur, some areas around  Lake Sevan, without clarifying what the borders are. And only during  the Prague meeting, the President of Azerbaijan announced the  recognition of the borders based on the data of 1991, when the post-  soviet states were established. "I would be glad if it would be  beneficial for Baku as well, since it would become one of the main  directions for concluding a peace treaty," Aram Sargsyan noted.  He  reminded that Levon Ter-Petrosyan, the first president of RA, signed  the Almaty declaration with reservations, where it was mentioned  about the need to solve the Artsakh issue in accordance with  international standards.This problem, as the party chairman  mentioned, still exists today. "Armenia has no claims to the  territorial integrity of Azerbaijan, but there is a problem related  to the right of the people of Karabakh to exist, their right to live  on their land and express their own will," the leader of the  "Republic" party said.