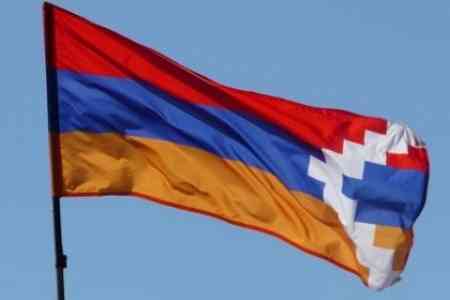 ArmInfo.The Parliament of Nagorno-Karabakh calls on the co- chairing countries of the OSCE Minsk Group (USA, France, Russia) and all UN members to recognize the  independence of the Republic of Artsakh.

Thus, the statement of five parliamentary factions, in particular,  reads: "On the Reunification of the DPR, LPR, Kherson and Zaporozhye  Regions to the Russian Federation Given the recognition of the  independence of the Donetsk People's Republic and the Lugansk  People's Republic by the Russian Federation and subsequent  reunification of the above territories, Kherson and Zaporozhye  regions with the Russian Federation on September 30, 2022, the NA  factions of the Republic of Artsakh record that the Republic of  Nagorno Karabakh exercised its right to self-determination in 1991 in  accordance with the norms of international law, the principles of  democracy and the USSR legislation in force at that time.The  international community recognized Azerbaijan as an independent state  within the boundaries defined by the internal legislation of the  USSR. According to that law, at the time of achieving independence of  Azerbaijan Nagorno-Karabakh had nothing to do with this country.  Otherwise Azerbaijan would not have been included in the UN.  Therefore, the territorial integrity of Azerbaijan has nothing to do  with the Nagorno-Karabakh Republic.

Bearing in mind the principle of equality and self-determination of  peoples established in the first article of the UN Charter and the  decision of the International Court of Justice of 22 July 2010,  according to which international law does not prohibit the  declaration of independence like in Kosovo. The factions of the  Artsakh Republic NA call on the co- chair countries of the OSCE Minsk  Group - the Russian Federation, the United States of America, France  and other 190 UN member states - to recognize the Nagorno-Karabakh  Republic, thereby eliminating the most serious existential threats  faced by its population," the statement signed by Free Motherland -  UCA, United Motherland, Justice, Armenian Revolutionary Federation,  Democratic Party of Artsakh reads.  It should be noted that on  October 6, in Prague, as part of the first summit of the European  Political Community, initiated by Macron, a quadripartite meeting of  the leaders of France Emmanuel Macron, Armenia Nikol Pashinyan,  Azerbaijan Ilham Aliyev and President of the European Council Charles  Michel was held.

Following the meeting, Armenia and Azerbaijan reaffirm their  commitment to the UN Charter and the Alma-Ata Declaration of 1991, by  which they mutually recognize each other's territorial integrity and  sovereignty. Armenia agrees to assist in the implementation of the  civil mission of the European Union on the border with Azerbaijan,  with which it is ready to cooperate. The purpose of the mission is to  build confidence and facilitate the work of the border commissions.