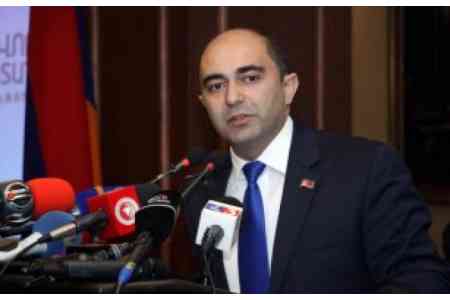 ArmInfo. Ambassador-at-large Edmon Marukyan has commented on the results of the meeting between the leaders of Armenia, Azerbaijan, France and European Council in  Prague.

According to the official documents, Azerbaijan has agreed to  cooperate with the EU civilian mission along the Armenian-Azerbaijani  border.

"Thus, a possible new aggression by Azerbaijan will be traced back on  the ground. Moreover, the occupied sovereign territory of Armenia  will be marked out," Mr Marukyan wrote.

On October 5, 2022, Vice President of the European Commission and  High Representative of the EU for Foreign Affairs and Security Policy  Josep Borrell stated the EU proposed deploying a border monitoring  mission, but Azerbaijan opposed.

One more all-important result is that Azerbaijan agreed to recognize  Armenia in conformity with the U.N. Charter and the Alma-Ata  declaration.

"After that Azerbaijan will not be able to lay any claims to  Armenia's sovereign territories during the delimitation process,  which also means Azerbaijani troops must leave the earlier occupied  territories," Mr Marukyan wrote.