Russian Ambassador: Ensuring security of Armenia is one of   priorities of Russia 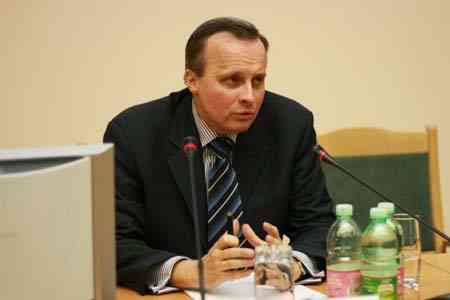 ArmInfo.On October 4, the Prosecutor General of Armenia Anna Vardapetyan received Ambassador of the Russian Federation to the Republic of Armenia Sergey Kopyrkin.  This was reported by the press service of the supervisory authority.

The Ambassador, congratulating Anna Vardapetyan on assuming a  responsible position, expressed confidence that the cooperation  between the Prosecutor General's Offices of Armenia and Russia will  be strengthened and be continuous.

Anna Vardapetyan asked to convey her best wishes to her Russian  counterpart, Prosecutor General of the Russian Federation Igor  Krasnov, emphasizing that she is ready to make every effort to ensure  that the partnership and trust relations that have developed between  the two departments reach a qualitatively new level.

Sergei Kopirkin noted that Russia is making every effort to resolve  the issues raised, adding that ensuring the security of Armenia is  one of the priorities of the Russian Federation.

During the meeting, the parties also discussed other issues of mutual  interest, which mainly related to mutual legal assistance.