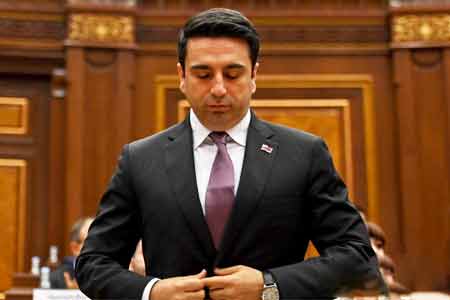 ArmInfo. Issues related to the independence, sovereignty and territorial integrity of Armenia are non-negotiable,. Speaker of the National Assembly of the Republic  of Armenia Alen Simonyan told journalists on October 4.

According to him, these three concepts are a "red" line for the  country's authorities. Simonyan noted that the Armenian side in the  negotiations with Azerbaijan, did not accept a single proposal from  Baku, and there is not a single document on the negotiating table.

Meanwhile, the Haykakan Zhamana" daily, owned by the family of the  head of the Armenian government Nikol Pashinyan, reported on the  preconditions put forward by Azerbaijan to Armenia. "Call the daily  and ask, I declare that there are no prerequisites," the Speaker  said.

Speaking about regional players, including Russia, Simonyan noted  that each state has its own interests in the region.  And, as the  speaker noted, how Armenia will be able to resist these interests in  this situation is another question. "Today we are doing everything to  the maximum," the NA President said.

He added that the issue of weapons not delivered to Armenia, despite  the payment of hundreds of millions of dollars, may be related to the  problems of the conflict in Ukraine. The Speaker noted that he would  discuss this issue with his Russian partners during his visit to  Moscow. Issues related to the CSTO, the Treaty of Friendship,  Cooperation and Mutual Assistance between Armenia and Russia  and use  of its forces will also be discussed. Simonyan did not rule out the  possibility that "the CSTO will decide to leave Armenia." "If there  is no appropriate reaction from this body to what is happening on the  borders of the country, this may be a reason for serious  consideration for us, but we should not make sudden movements without  understanding the consequences," the head of the Armenian parliament  said.

He criticized the position of a number of politicians who question  the peaceful agenda of the country's authorities. <What do they want?  Eternal war? If there is someone who will offer a real option,  we  are open to any ideas. But I don't take initiatives resembling toasts  seriously," Simonyan stressed.