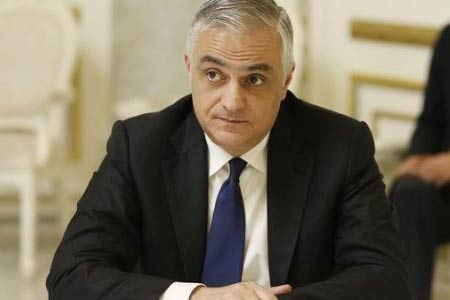 According to the press service of the RA government, in this vein,  Grigoryan thanked the U.S. authorities for their targeted statements.

In turn, the Ambassador noted the importance of the visit of foreign  diplomats to the affected settlements, which was organized by the  Government of the Republic of Armenia. The Deputy Prime Minister and  the U.S. Ambassador also exchanged views on the issues of bilateral  Armenian-American cooperation, touched upon the ongoing work towards  the formation of the Ministry of Internal Affairs.

On the night of September 13, the Armed Forces of the Republic of  Azerbaijan began large-scale military operations on the border with  Armenia using UAVs and large-caliber weapons. Armenia turned to  Russia, the CSTO and the UN Security Council in connection with the  aggression of Azerbaijan against the sovereign territory of Armenia.  According to the RA Prime Minister, there are 207 killed servicemen  and four civilians on the Armenian side. And Azerbaijan confirmed the  death of its 80 soldiers. As a result of this enemy aggression,  according to experts, about 150 sq. km of sovereign territories of  the Republic of Armenia is under the occupation of Azerbaijan The UN  Security Council, at the suggestion of France, held a special meeting  on September 14-15 because of the situation on the  Armenian-Azerbaijani border.  Armenia initiated a special meeting of  the OSCE Council. Following the results of the special meeting, the  CSTO sent a mission to Armenia to prepare a report on the situation.  The Frontier Department of the FSS of the Russian Federation in the  Republic of Armenia, which was attacked on September 13-14 by  Azerbaijani units, also became target  of the aggression of the  Azerbaijani Armed Forces.  The Armenian side stated that with the  participation of the international community, it was possible to  reach an agreement on a ceasefire along the entire length of the  Armenian-Azerbaijani border from 20:00 on September 14. According to  Armenian human rights activists, as a result of the latest  aggression, up to 20 Armenian servicemen may be in Azerbaijani  captivity. It should be noted that on September 20, the enemy handed  over to Armenia the bodies of another 95 servicemen, and another 6  bodies were handed over on September 23. As a result of enemy  aggression, several dozens of Armenian settlements suffered.