MP: While Nikol Pashinyan`s government is trying to justify the need  to conclude a peace treaty, Azerbaijan is committing yet another war  crimes 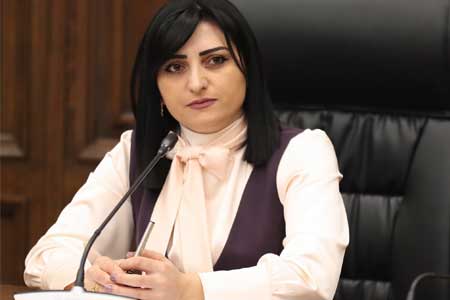 ArmInfo. While Nikol Pashinyan's government is trying to consistently justify the need to  conclude a peace treaty, Azerbaijan is committing yet another war  crimes.  Chair of the NA Standing Committee on Protection of Human  Rights and Public Affairs Taguhi Tovmasyan stated. It should be noted  that the MP is not a member of any party at the moment.

At the same time, she stressed that the killings of Armenian  prisoners of war by the armed forces of Azerbaijan are another  manifestation of the genocidal policy of Azerbaijan, sponsored at the  state level.

"These crimes of violating the right to life of prisoners of war  completely violate the prohibitions enshrined in the Geneva  Convention on the Treatment of Prisoners of War of August 12, 1949:  attacks on life and physical integrity, in particular murder,  mutilation, ill-treatment and torture of all kinds. In captivity, the  state is responsible for its behavior with prisoners of war,  therefore I am sending urgent letters to international organizations,  all international partners related to human rights, to urgently use  all political and legal mechanisms to protect the rights of Armenian  prisoners of war under the "humanitarian mandate" of the  international community.  These crimes of the military-political  authorities of Azerbaijan should be immediately investigated by the  international court and society in terms of their criminal legal  qualification, and the criminals should be held accountable,"  Tovmasyan concluded.  It should be noted that a video is being  circulated in Telegram channels in which Azerbaijani soldiers shoot  unarmed Armenian soldiers. The incident most likely took place in the  direction of Jermuk during a large- scale military aggression  unleashed on the night of September 13th.