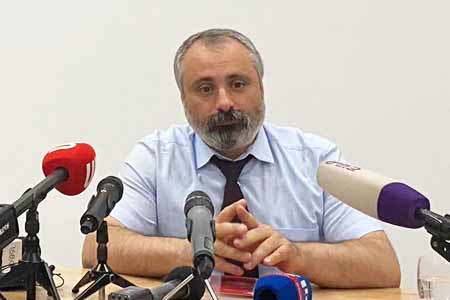 ArmInfo.. Minister of Foreign Affairs of the Republic of Artsakh David Babayan met in Los  Angeles with California State Senator Anthony J. Portantino and  California Assembly member Adrin Nazarian.  According to the press  service of the NKR MFA, issues related to the Artsakh-California  relations and the current situation in Artsakh were discussed during  the meeting.

The Minister expressed his gratitude to Anthony J. Portantino and  Adrin Nazarian for their multi-year principled and objective position  and adherence to universal values.

Mayor of the City of Glendale Ardashes (Ardy) Kassakhian, Deputy  Minister of Education, Science, Culture and Sports of the Republic of  Artsakh Lernik Hovhannisyan, Permanent Representative of the Republic  of Artsakh to the USA and Canada Robert Avetisyan and representatives  of the Hay Dat participated in the meeting.

Then, Babayan held a meeting with representatives of the Armenian  National Committee of America-Western Region headed by Chair Nora  Hovsepian. Members of the Board of the Armenian Educational  Foundation and a group of benefactors also participated in the  meeting.  Issues related to the implementation of various programs in  Artsakh were discussed.  The Minister expressed his gratitude to ANCA  for constantly supporting Artsakh and protecting the interests of our  Republic.  David Babayan highly appreciated the efforts of the  Armenian Educational Foundation in achieving tangible results in the  scientific-educational sphere, stressing that the institution has its  specific role in the development of the intellectual potential of the  Armenian people.  Permanent Representative of the Republic of Artsakh  to the USA and Canada Robert Avetisyan was also present at the  meeting.