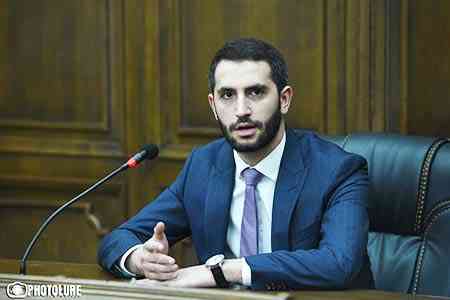 ArmInfo.. The meeting between the Prime Minister of Armenia and the President of Turkey may take place in the near future, Deputy Speaker of the Armenian Parliament,  Special Representative for Negotiations with Turkey Ruben Rubinyan  said in an interview with the RFE/RL's Armenian Service, noting that  " the process of regulating Armenia-Turkey relations is in the  agenda."

Earlier it was reported that Nikol Pashinyan and Recep Tayyip Erdogan  may meet on October 6 in Prague.  Rubinyan recalled that his last  meeting with Ankara's special envoy for the normalization of  Armenian- Turkish relations, Serdar Kilic, took place in July, when a  well-known agreement was reached on opening borders for citizens of  third countries and creating the possibility of direct air  transportation of goods. <In fact, on September 14, a meeting was to  be held at the border between representatives of the relevant  departments of the two countries to discuss the implementation of  these two political agreements, however, on September 14, let me  remind you, this was during the Azerbaijani attack, the meeting was  postponed at the request of the Turkish side>, he noted.

When asked that the agreements actually remained on paper, he said  that they must be implemented, because in the end there is a  political agreement and political responsibility for the  implementation of this agreement.

Touching upon the fact that Ankara is openly trying to show that it  is ready to take on the role of a mediator, to make such efforts, and  whether Yerevan considers such a format acceptable if Erdogan makes  such an offer, the special representative noted that " only neutral  parties can be mediators." <I believe that no one can call Turkey  neutral in the context of Armenian-Azerbaijani relations and  Azerbaijan's invasion in the territory of Armenia>, Ruben Rubinyan  pointed out.