Arman Ghukasyan: The true goal of anti-Russian propaganda in Armenia  is to oust Russia from the region 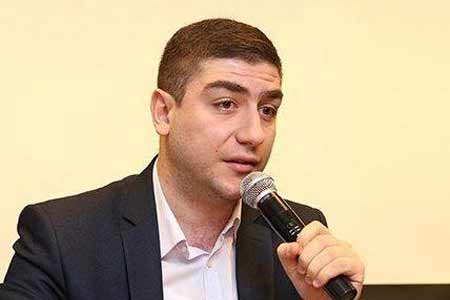 ArmInfo.The discussion about Armenia's withdrawal from the CSTO is artificial, while there is no such discussion at the public level, it is pushed through by pro-Western  social and political circles and their sponsors. Arman Ghukasyan, a  member of the "Voice of the People" expert club, stated this at a  meeting with journalists.

According to him, today one-sided manipulation of the minds of  citizens is actively spreading and work is being carried out not only  through pro-Western channels for transmitting information, but also  from official pro-government resources.

As Ghukasyan pointed out, many pro-Western forces in Armenia  presented Pelosi's visit to Armenia as the fact that the Americans  are in a hurry to help the Armenian people precisely in connection  with the aggravation of relations with Baku, however, these  information flows have nothing to do with reality. The expert  recalled that this visit was planned long before the escalation of  the conflict. So it is obvious that the Americans and their support  group have done everything to mislead the public in order to take  advantage of the current situation.

"The United States has always  played and is playing on the contradictions between different  countries and is trying to extract dividends for itself. This is  typical of American politics," he stressed.  According to the expert,  the activity of the West is obvious, and the explanation for this is  very simple: the military confrontation in Ukraine. Now the  collective West is doing so in order to expose the flanks of Russia  and open up various new fronts against Moscow. Given that Armenia is  Russia's ally in the South Caucasus, and the region itself is rather  complex, the US interest in Armenia has grown significantly here.

The goal of the USA is he displacement of Russian interests from the  region rather than the well-being and security of Armenia.  At the  same time, as Ghukasyan emphasized, the fact that the USA already has  an ally in the South Caucasus region in the form of Turkey is being  forgotten, the latter is a member of NATO. How will the US arm  Armenia against its ally? How will the US place NATO bases instead of  the 102nd Russian military base in Gyumri, which protects Armenia, if  this is not possible within NATO? Armenia, as a result of rash  actions, may again face the Turkish threat. It is this decision that  the pro-Western advisers of some socio-political forces of Armenia  are leading to," Arman Ghukasyan is sure.  The true goal of  anti-Russian propaganda in Armenia is to oust Russia from the region,  but only Armenia will suffer from this," the expert concluded.