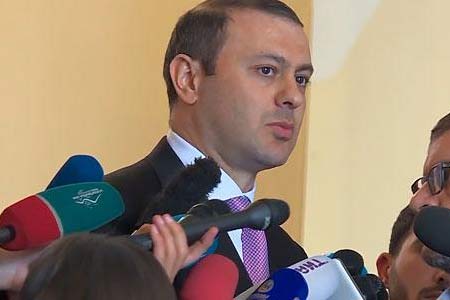 ArmInfo. U.S. participation in regional processes has a positive effect and  additional security guarantees. Secretary of the Security Council of  Armenia Armen Grigoryan stated this in an interview with the Armenian  service of the Voice of America.

Referring to the meeting held in Washington with Assistant to the  President of Azerbaijan Hikmet Hajiyev through the mediation of  National Security Adviser to the US President Jake Sullivan, Armen  Grigoryan assessed it as very effective.

"We discussed the agenda for the settlement of the Nagorno-Karabakh  problem, as well as the topics of establishing peace in the region.  They are related to the delimitation and security of borders, as well  as other issues that can bring stability and peace to the region,"  Grigoryan said.

He noted that today Armenia and Azerbaijan are discussing four  interrelated agendas:  humanitarian, unblocking the region,  delimitation and demarcation, issues related to the Nagorno- Karabakh  problem. "We tried to assess how we are moving forward in these areas  and in everything related to the peace treaty between Armenia and  Azerbaijan. The specifics of how we move forward are related to these  very topics >, said the Secretary of the Security Council.

Grigoryan recalled that in addition to the format of their meetings,  the Armenian-Azerbaijani talks are also held in other formats - at  the level of foreign ministers, deputy prime ministers and heads of  the national security service. Along with all this, according to  Grigoryan, there are also meetings of the leaders of the country,  which are connected with the progress recorded in other formats. He  points to two main factors that made it possible to establish a  ceasefire during the recent military clashes on the border between  Armenia and Azerbaijan. According to him, these are the response  actions of the Armenian army and the involvement of the American  side. "The personal involvement of Secretary of State Blinken, who  had several telephone conversations with the Armenian Prime Minister  and the President of Azerbaijan, as well as intensive US involvement  at other levels led to de-escalation," Grigoryan said.