Japan ready to support establishment of peace in region 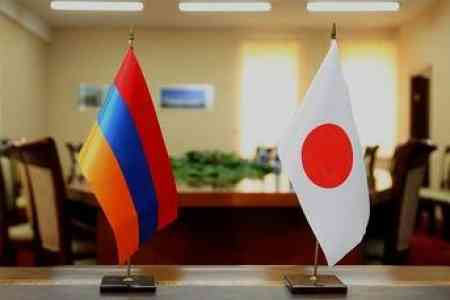 The NA Vice President conveyed information in detail on the  Azerbaijani encroachments towards the sovereign territory of the  Republic of Armenia, including the civilian and military casualties  of the Republic of Armenia, the damages caused to the settlements and  infrastructures of Armenia. In this context the NA Deputy Speaker  highlighted the targeted condemnation of the aggressive actions of  Azerbaijan by the international community.

Hidehisa Otsuji expressed regret over the military clashes between  Armenia and Azerbaijan recently expressed his condolences on the  human losses in Armenia. Hidehisa Otsuji informed that Japan in  favour of peace everywhere, and that they are ready to support the  establishment of peace in the region.

The participants of the meeting discussed a number of issues  regarding the bilateral relations, expressed willingness to make  additional efforts to deepen and expand the political and culture  ties between Armenia and Japan.

During the visit Hakob Arshakyan also met with the Minister of  Education, Culture, Sports, Science and Technology of Japan Keiko  Nagaoka. The interlocutors discussed the issues of the development of  cooperation in education, possibilities for increasing scholarships  and exchange programmes, deepening cooperation in  scientific-educational and IT spheres.

The parties emphasized cooperation between universities of the two  countries and mutual visits of Armenian and Japanese scientists and  researchers for the joint activities in the two countries.